February 27, 1913: The suffrage hikers pushed on toward Washington, D.C., this morning despite rain, mud, hecklers and a growing conflict with the officers of the National American Woman Suffrage Association.

General Jones and her suffragist Army of the Hudson left Laurel, Maryland, about 9:00 this morning for another day of wading through the State’s notoriously muddy roads on their journey from Newark, New Jersey, to the nation’s capital. They were joined by 25 schoolchildren who happily hiked along until someone noted the approach of the Truant Officer, at which point the students scattered and headed for their classroom.

The students of the Maryland Agricultural College at College Park were not nearly so well behaved. In addition to jeering the hikers, they got into a fist fight with some of the “war correspondents” (reporters) accompanying the marchers. After getting the worst of it, the students retreated back to their campus.

Things began looking up at Beltsville, where the hikers enjoyed a luncheon of crackers, fruit and apple cider, as well as the chance to briefly shed the oilskin table cloths that were made into ponchos and added to their regular rain gear this morning. Back on the road again, some of the marchers, Phoebe Hawn and Mary Baird in particular, were clearly suffering from major foot problems, but are still determined to make it the rest of the way.

The next stop for the troops was Hyattsville, where they were met by former mayor Magruder, who escorted the hikers to the Armory. There they were given another luncheon, this courtesy of the Prince George’s County Business Men’s Association. After reaching the day’s goal of Bladensburg, some retired to the George Washington House, the 54th such place the hikers have encountered in their travels which claims to have been one of Washington’s temporary headquarters while marching from New York to Yorktown. Other hikers went to the Palo Alto Hotel, where the Manhattan cocktail was invented in 1846. 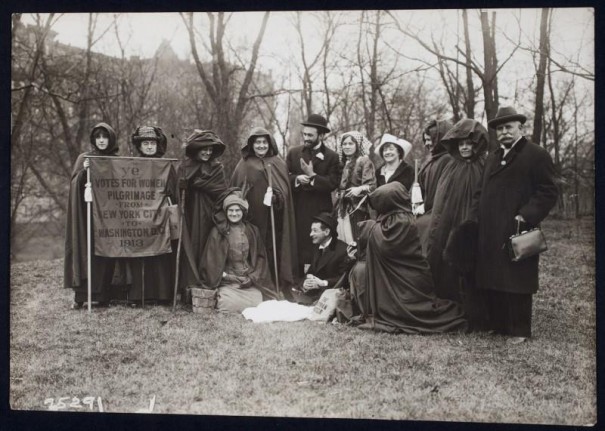 Genevieve Champ Clark, daughter of the Speaker of the House, journeyed out from Washington to greet the marchers and was given an ovation by those not already in bed tending to their weary feet.

Today’s stormy weather matched the relations between the hikers and the officers of the New York based National American Woman Suffrage Association. At the beginning of the hike it was made clear that should she make it all the way to D.C., General Jones was to deliver a letter from prominent suffragists to President-elect Wilson. But N.A.W.S.A. decreed today that the letter, which Jones has carried and carefully kept dry for 16 days and over 240 miles, is to be formally presented to Wilson by a delegation of N.A.W.S.A. officers and their D.C. based Congressional Committee, though members of the pilgrim army may be “present” as well.

The letter was dutifully turned over tonight to Alice Paul, head of N.A.W.S.A.’s Congressional Committee, with General Jones saying: “If the New York suffragists feel it is better for the Congressional Committee to deliver the letter there seems little else for me to do than to bow to its wishes. As for my feelings on this matter I have little to say, other than that I am willing to make any sacrifice for the cause.”

The issue of which hikers are officially recognized by N.A.W.S.A. remains yet another source of friction. There will be a luncheon tomorrow given by N.A.W.S.A., but only women hikers who have walked the entire distance are invited. Since the men and women who walked part way, those in charge of the literature wagon, baggage car, and scout vehicle, plus the members of the press contingent are excluded, all the “eligible” marchers have decided to show solidarity with their comrades by declining the invitation.

Still, even with the bad roads, foul weather, and last-minute organizational politics, General Jones remains optimistic tonight, just one day’s march from D.C. and the end of the long trail. She summed up her feelings in verse:

Oh sisters, my sisters!
The trip is nearly done;

The hikers slowly plod along,
The towns pass one by one.

The weary miles are left behind,
The Capitol draws near;

And soon our lengthy march will end,
Amid a deafening cheer.

Oh, sisters, my sisters!
The walk was long and hard;

‘Twas up a hill and down a dale,
across God’s dewy sward.

While women laughed and men have jeered,
At us and at our cause;

Yet every step brought near the time,
When we shall make the laws.