Nineteen ceremonial pens were used, which he gave to those who had worked hardest for the bill’s passage. He called the practice of paying women less than men for the same work “unconscionable.” The new law will take effect next year, be enforced by the Labor Department’s Wage & Hour Division, and apply to workers presently covered by the Fair Labor Standards Act.

To establish that an employer has violated the law, it must be shown that different wages are being paid to men and women, that the employees are doing substantially equal work on jobs requiring the same skill, effort and responsibility, and the jobs are performed under similar working conditions.

Twenty-two States already have equal pay laws on their books, but discrimination is still widespread. In one recent survey of employers, about a third admitted they had separate pay scales for male and female office workers. Since the Fair Labor Standards Act and Equal Pay Act do not cover all workers, and the law does not deal with equal pay for “comparable” work, and does not ban any form of gender bias by an employer except in regard to salary, the battle for total equality and equal opportunity in the workplace is not yet over. But women’s groups justifiably hailed today’s development as a major advance toward workplace equality for women. 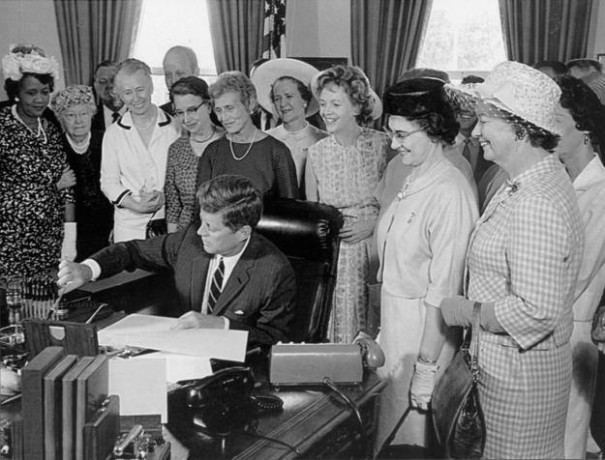 President Kennedy told those who were invited to the White House to witness the signing of the bill:

I am delighted today to approve the Equal Pay Act of 1963, which prohibits arbitrary discrimination against women in the payment of wages. This act represents many years of effort by labor, management, and several private organizations unassociated with labor or management, to call attention to the unconscionable practice of paying female employees less wages than male employees for the same job. This measure adds to our laws another structure basic to democracy. It will add protection at the working place to the women, the same rights at the working place in a sense that they have enjoyed at the polling place.

While much remains to be done to achieve full equality of economic opportunity – for the average woman worker earns only 60 per cent of the average wage for men – this legislation is a significant step forward.

It is extremely important that adequate provision be made for reasonable levels of income to them, for the care of the children which they must leave at home or in school, and for protection of the family unit. One of the prime objectives of the Commission on the Status of Women, which I appointed 18 months ago, is to develop a program to accomplish these purposes.

The lower the family income, the higher the probability that the mother must work. Today, one out of five of these working mothers has children under three. Two out of five have children of school age. Among the remainder, about fifty per cent have husbands who earn less than $5,000 a year – many of them much less. I believe they bear the heaviest burden of any group in our Nation. Where the mother is the sole support of the family, she often must face the hard choice of either accepting public assistance or taking a position at a pay rate which averages less than two-thirds the pay rate for men.

It is for these reasons that I believe we must expand day-care centers and provide other assistance which I have recommended to Congress. At present, the total facilities of all licensed day-care centers in the nation can take care of only 185,000 children. Nearly 500,000 children under twelve must take care of themselves while their mothers work. This, it seems, to me, is a formula for disaster.

I am glad that Congress has recently authorized $800,000 to State welfare agencies to expand their day-care services during the remainder of the fiscal year. But we need much more. We need the $8 million in the 1965 budget for the Department of Health, Education and Welfare allocated for that purpose.

We also need the provisions in the tax bill that will permit working mothers to increase the deduction from income tax liability for costs incurred in providing care for their children while the mothers are working. In October the Commission on the Status of Women will report to me. This problem should have a high priority, and I think that whatever we leave undone this year we must move on in January.

I am grateful to those Members of Congress who worked so diligently to guide the Equal Pay Act through. It is a first step. It affirms our determination that when women enter the labor force they will find equality in their pay envelopes.

We have some of the most influential Members of Congress here today, and I do hope that we can get this appropriation for these day-care centers, which seems to me to be money very wisely spent, and also under consideration of the tax bill, that we consider the needs of working mothers, and both of these will be very helpful, and I would like to lobby in their behalf.