In a momentous and surprise announcement that is sure to help in tomorrow’s crucial House vote, the President has ended many years of evasion and neutrality on the issue by coming out strongly in favor of women having a Constitutionally guaranteed, nationwide right to vote.

The announcement came after a meeting with Democratic members of the House Committee on Suffrage, and in the form of a statement given out by its leader

The committee found that the President had not felt at liberty to volunteer his advice to members of Congress in this important matter, but when we sought his advice he very frankly and earnestly advised us to vote for the amendment as an act of right and justice to the women of the country and the world. 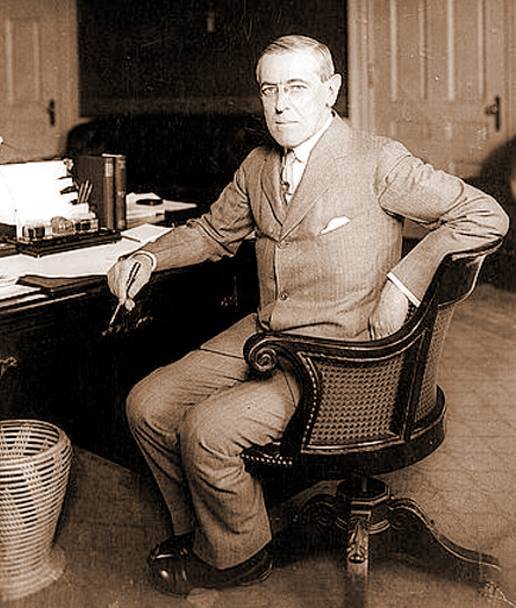 The President’s influence has long been considered by many to be the final factor needed to gain the last few Democratic votes necessary to get 2/3 approval in both Houses of Congress and send the amendment to the States for ratification by 36 out of 48 State legislatures.

Speculation over Wilson’s reasons for endorsement at this time runs high. Practical politics certainly played a major part. With Republicans pledged to give the amendment overwhelming support tomorrow, if Democrats block its passage, women in States where they have already won suffrage might vote strongly Republican in the upcoming midterm elections to help the amendment’s chances in the next Congress.

In fact, it was a growing feeling of panic among Democratic leaders about a possible backlash from pro-suffrage voters in November which was the reason for tonight’s meeting with the nation’s highest ranking Democrat in the first place. Reports are that President Wilson went into great detail about why all U.S. women should have the vote, and why changed circumstances (such as U.S. entry into the World War and women’s praiseworthy contributions to the war effort) have now made it appropriate for him to end his neutral stance. Suffrage leaders are, of course, elated. Carrie Chapman Catt, President of the National American Woman Suffrage Association said:

We are thrilled by the President’s statement to the delegation of Representatives who waited on him seeking his advice about the Federal suffrage amendment. Most of all we do appreciate his setting forth that the passage of the amendment is an act of right and justice at this time to the women of this country and the world.

It is difficult to express our gratification at the President’s stand. For four years we have striven to secure his support for the national amendment, for we knew that it and perhaps it alone would insure our success. It means to us only one thing – victory. Sex-sevenths of the Republicans have already pledged their votes. The Democrats will undoubtedly follow their great leader.

The role of the National Woman’s Party (formerly the Congressional Union for Woman Suffrage) in pressuring President Wilson into supporting nationwide woman suffrage should not be underestimated. Its picketing of the White House to point out the hypocrisy of President Wilson’s strong support of democracy worldwide while doing nothing to enfranchise the female half of the U.S. population must certainly have caused great concern to the Administration. The arrests, imprisonment, hunger strikes and force-feedings of the suffrage pickets over the past year clearly focused attention on the issue like nothing else could have, and generated great sympathy for the “Silent Sentinel” picketers and their cause. So it is perhaps more than coincidence that the announcement was made exactly a year to the day after the meeting between suffragists and the President in which his unsatisfactory statements on the subject caused such indignation that picketing along the White House fence began the next day.