May 26, 1919: Despite the frantic efforts of opponents, the Susan B. Anthony (nationwide woman suffrage) Amendment appears to be on the verge of final passage by Congress, and being sent to the States for ratification.

Only a filibuster, led by Senator Hoke Smith, Democrat of Georgia and Senator Oscar Underwood, Democrat of Alabama, prevented a vote today.

Senator Wesley Jones, Republican of Washington, is trying to get a motion passed to take the Anthony Amendment out of the hands of the Suffrage Committee and on to the floor for a vote by the full Senate. But Senator Smith made a motion to table Jones’ motion. If Smith had been successful, his motion would have prevented a vote for an indefinite, but certainly a very long, time. 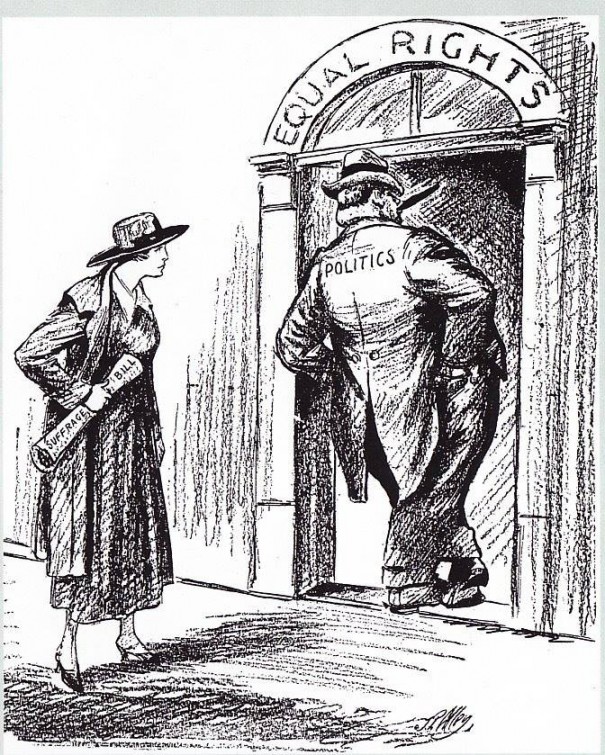 Delay is now the main strategy of anti-suffragists, who want to keep women from voting in next year’s Presidential election, even though they know that they can’t keep them out of the voting booth forever. Virtually all State legislatures were in session early this year, so they could have voted on ratification quickly if the new Congress had immediately passed the Anthony Amendment and sent it to the States for approval. But as time has gone by, some legislatures have finished their business and adjourned, and many more will do so. When that happens, ratification can only occur when a State’s governor calls the legislature back into special session, something anti-suffrage governors won’t do at all, and even pro-suffrage governors are reluctant to do because of the extra expenses involved to taxpayers.

Smith’s motion to table was defeated by an encouraging 64 against to 27 in favor, indicating that even if the entire Senate had been present, there are at least 64 votes for suffrage, exactly the 2/3 of the 96 Senators needed. Nineteen Democrats and eight Republicans voted for the Smith motion, with forty-one Republicans twenty-three Democrats against.

Had Senator Jones’ motion been voted upon and passed, the Anthony Amendment wold have been discharged from the Suffrage Committee, and Jones would have then called for an immediate vote by the full Senate. It would have passed 64 to 27, giving it three votes to spare among the 91 Senators present and voting.

Having failed to bury the amendment, opponents had no other tactic left than to filibuster and delay a vote as long as possible. So Senators Smith and Underwood, assisted by a rare anti-suffrage Republican, Senator Wadsworth of New York, took to the floor and talked for the remainder of the session, thus forcing the matter to be put over until day after tomorrow.

If not for the opposition of Southern Democrats, the amendment would have passed long ago, and might already have been ratified by 36 of the 48 States. But despite the frustrations of being within a few votes of the 2/3 majority needed for passage session after session, suffragists have refused to “compromise” with segregationists by re-wording the amendment so that it would enfranchise white women only, or satisfy “States Rights” advocates by eliminating the section that gives Congress the power to enforce it.

But with 64 solid votes in the Senate, and passage by the House already accomplished on May 21st by a vote of 304 to 89, it now appears that this phase of the long battle is drawing to a close, and that the Susan B. Anthony Amendment will soon pass Congress in its pure form, as a worthy tribute to the woman it is named for.

This is the full text of the proposed 19th Amendment, precisely the same today as when it was first introduced into Congress on January 10, 1878, by Senator Aaron Sargent, Republican of California:

Section 2: Congress shall have the power to enforce this article by appropriate legislation.