February 25, 1913: Proving that they can be just as bold indoors as on the road, the suffrage hikers descended upon two of Baltimore’s most patriarchal institutions on this, the 14th day of their pilgrimage from Newark, New Jersey, to Washington, D.C.

The first visit of the day was to Cardinal Gibbons at his residence. Though known for his personal opposition to woman suffrage, he treated his unexpected visitors with great respect, even after General Jones of the suffragist Army of the Hudson impulsively gave him a handshake instead of kneeling and kissing his ring, as is customary for all local visitors, regardless of their religious affiliation.

Jones then presented the Cardinal with a small “Votes for Women” pennant, which he graciously accepted, though with the friendly admonition that ” … in accepting this souvenir of your march, it is not necessarily a conversion to your cause.” 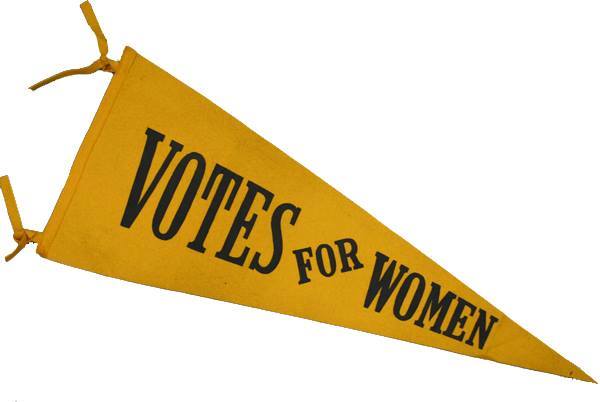 He then diplomatically praised the hikers without actually endorsing equal suffrage:

I hope your mission may commend itself to the judgment and conscience of the legislators. I am sure if they do not form a favorable opinion from your courage and determination their hearts must be harder than the stones that have bruised your feet on the march. I do not wish to bias their judgment, but you certainly deserve well for the efforts you have made and the courage you have shown.

The Cardinal then asked some questions about the hike, and commented: “It is wonderful that women could have done what you have done. When you have completed your pilgrimage and Washington is reached, I am sure that all will agree with me that you deserve …. a good rest.” For just a moment during the pause, the hikers dared hope he would say “the vote” instead of “a good rest,” but they were still quite pleased with his friendly tone, and deemed the meeting a successful one, all things considered.

The next encounter was a luncheon sponsored by the Sons of Jove. Another breach of local etiquette here, when as cigars and cigarettes were passed around, Elizabeth Freeman took one and began puffing away. The sight of a woman smoking in public shocked local suffragists, and one quickly told Freeman: “We don’t do that in Baltimore.” Her action jolted the Jovians as well, one of whom took the cigarette from her hand and extinguished it. But other than that, the reception went well.

The hikers also called upon Acting Mayor Hubert, who accepted a “Votes for Women” flag and gave the pilgrims a letter to the Mayor of Laurel, the city they expect to reach tomorrow night after the hike resumes in the morning. Earlier this evening, the hikers went to the New Theater, where they, Lausanne, the suffragist horse who pulls Elizabeth Freeman’s literature wagon and Jerry, the donkey, who pulls a small cart for a woman tourist who’s now accompanying the hikers, went on stage to great applause.

The Army of the Hudson seems reunited in spirit again as the dispute between General Jones and Colonel Craft over the speed of the march and the priority given to socializing with the locals seems to have been smoothed over. But problems still remain. The permit for the pilgrims’ march and police escort into and through the streets of Washington, D.C., has turned out to be issued for a day too early. Since speeding up the hike to conform to the date on the permit would revive the feud with Colonel Craft, that’s not an option, so the permit application process will have to be begun again.

Despite the unintentional breaches of custom during the visits to the Cardinal and the Jovians, plus the misdated parade permit, the hikers are quite optimistic, well-rested and eager to be on the road again, with their destination now easily attainable in time to join in the National American Woman Suffrage Association’s massive parade and pageant on March 3rd.