July 16, 1920: Both factions of the suffrage movement were quite busy today.

Alice Paul of the National Woman’s Party met with Democratic Presidential nominee Governor James Cox of Ohio, while Carrie Chapman Catt, head of the National American Woman Suffrage Association, left New York for Tennessee to coordinate N.A.W.S.A.’s ratification campaign there. Both women, sensing that victory is finally within reach, are now putting maximum pressure on anyone who can help deliver the 36th and final State needed to get the Susan B. Anthony (nationwide woman suffrage) Amendment into the Constitution in time for women to register for the November elections.

Alice Paul and the other National Woman’s Party members with her were quite demanding of Governor Cox at today’s meeting, and got the reassurances they sought from the long-time active supporter of suffrage that he would do everything he could to help:

I give to you without any reservation the assurance that my time, my strength and my influence will be dedicated to your cause as our combined councils might suggest, with a view to procuring a favorable result in Tennessee.

We are glad that Governor Cox appreciates the responsibility of carrying out the party platform. His statement this afternoon indicates that he realizes the unprecedented opportunity offered the Democratic Party to enfranchise the 17,000,000 women of the nation by giving the 36th suffrage State.

Alice Paul is, of course, more interested in deeds than words, so she concluded by saying: “We shall look for immediate action by Governor Cox.” 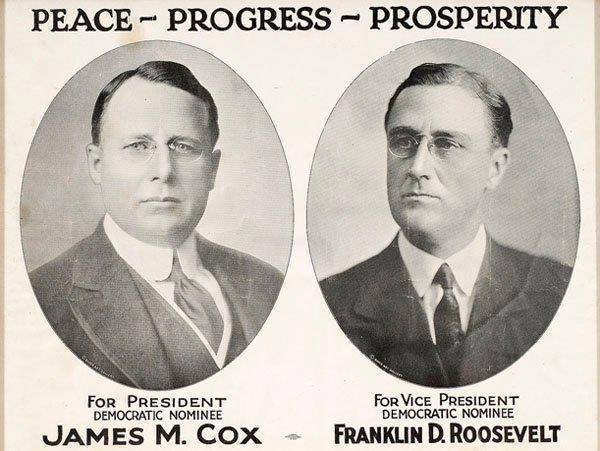 Republican Presidential nominee Warren G. Harding’s statement day before yesterday, in which he finally got around to urging Republican legislators in Tennessee and North Carolina to ratify the suffrage amendment wasn’t sufficient for the usually-diplomatic Catt. She expressed disappointment that after doing so much for the cause, Republicans are now failing to provide the final State ratification needed. As she left for Nashville, she said:

It’s not enough for Senator Harding to make an effort to secure the 36th ratification. It is not enough to point to past performances. The Republican Party must finish the task. We now pin our faith on Tennessee and North Carolina prospects. It is true that the Republican Party has a record of nearly five times as many ratifications as the Democratic, but without the 36th State that record is like a tail without a kite. Apparently it is Democrats who must supply the kite.

Both Tennessee and North Carolina are Democratic States, and their legislatures will be called into special sessions in less than a month to vote on ratification of the proposed 19th Amendment. There has been great frustration among suffragists for many months over the fact that the Republican governors of Vermont and Connecticut have refused to call their legislatures back into session to vote on the measure, since it’s quite likely that it could quickly pass in either one.

The National Woman’s Party has expressed sentiments similar to those of N.A.W.S.A. regarding Senator Harding’s late entry into the battle for the ballot. The fact that Republicans have provided 26 of the 35 States that have ratified, and get half-credit for three more, in which one party controls the House and the other the Senate, isn’t enough:

Thirty-five States are worth nothing at all to us without the thirty-sixth. The bitter opposition we have encountered in the last few States and the delay since Washington, the thirty-fifth State, ratified on March twenty-second, indicate clearly that political leaders also know well the difference between a ‘good record’ and ratification.

Just over three weeks remain until special sessions of the legislature open in Tennessee (August 9th) and North Carolina (August 10th). Time to register for the November elections is running out for women in many States where they are not eligible to vote until the proposed 19th Amendment is ratified. Registration deadlines have already passed in two States (Georgia and Mississippi) so unless special legislation is enacted in those States, women will still not be able to vote in all 48 States this year even if the Anthony Amendment is ratified.

Now is the time for the parties to prove the sincerity of their convention resolutions in favor of nationwide woman suffrage by working to assure a “yes” vote on ratification by their members in the Tennessee and North Carolina legislatures next month. It will be by their success – or failure – to place a permanent and explicit guarantee of woman suffrage in the U.S. Constitution that the parties will be judged for many years, and not by easily passed and quickly forgotten party planks, or campaign rhetoric by Presidential candidates.