June 8, 1920: One hundred and twenty-five National Woman’s Party members surrounded the Chicago Coliseum on this first day of picketing, holding up large and colorful banners demanding that the Republican Party do more than just pass a pro-suffrage resolution at its national convention this week.

Instead of putting mere words in a party plank, or giving speeches patting themselves on the back for having done far more than Democrats for the cause of equal suffrage, Republicans must do something much more meaningful. Now that the Susan B. Anthony (nationwide woman suffrage) Amendment has been passed by Congress and won 35 of the 36 State ratifications it needs to become part of the U.S. Constitution, Republicans must provide that 36th State.

Mabel Vernon led 124 other members of the N.W.P. to the gates of the Coliseum, where most pickets carried their group’s purple, white and gold standards, while the rest held up huge banners explaining to Republican Convention delegates – and the press – why it’s now Republicans, not Democrats, who are preventing the Anthony Amendment from becoming the Nineteenth Amendment. 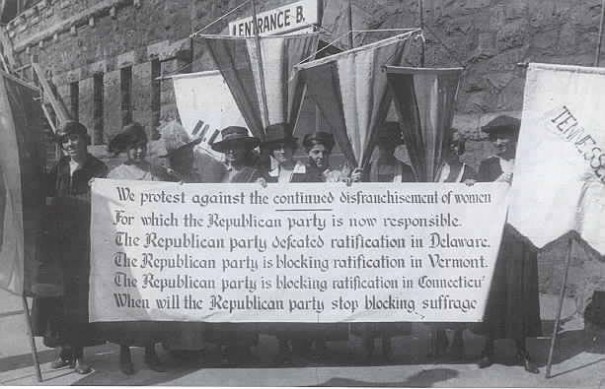 The banner refers to the fact that the Republican-controlled Delaware Assembly recently declined to even take a vote on ratification of the Anthony Amendment, and then adjourned until next year. A majority of State legislators in Vermont and Connecticut are believed to be in favor of suffrage, but their legislatures are not in session, and cannot meet until their next regular session in 1921 unless called into special session by their Republican governors, who have refused to issue the call. Another banner echoed the same theme: “The Republican Party has the power to enfranchise women. When will it do so?”

Like the N.W.P.’s “Silent Sentinels” who picketed the White House from 1917 to 1919 to pressure Democratic President Wilson into first endorsing, then actively working for nationwide woman suffrage, today’s protesters were deliberate and dignified. There was no heckling or harassment of delegates as they arrived or left. No speeches were made. There was simply a long and impressive line of women carrying powerful messages on banners.

Protesters such as Betty Gram, who came here from Portland, Oregon, proved that this was a nationwide effort. It was multi-generational as well. The pickets ranged in age from very young women to the venerable Reverend Olympia Brown, age 85, holding a banner in the hot sun that asked: “How long must women wait for liberty?”

Though there is no time limit on ratifying the Anthony Amendment, the Presidential election is just five months away. With voter registration deadlines having already passed in Georgia and Mississippi, and approaching in other States where women cannot presently vote, the answer to Reverend Brown’s question, first asked by the late Inez Milholland Boissevain in 1916, should be “no longer.”