January 12, 1917: Today was a very good – though quite frigid – one for the “Silent Sentinels” of the Congressional Union for Woman Suffrage.

They are standing next to the White House gates with suffrage banners and their tricolor standards from 9 AM until 5:30 PM each day until President Wilson endorses the Susan B. Anthony (nationwide woman suffrage) Amendment, then uses his considerable influence to get it approved by a Congress controlled by his fellow Democrats.

Though the idea of picketing was only suggested three days ago and implemented day before yesterday, this colorful protest has now stirred interest not just citywide, or even nationwide, but around the world. Among the many donations that came in today was one from Dora Lewis, of Philadelphia, who is spending the winter in Shanghai, China. Even there she heard of the picketing, and immediately wired $300 to help with expenses. Though certainly the most distant donor, she was not the most generous of the day. That honor went to Mary Burnham, also of Philadelphia, who gave $1,100. Sophie G. Meredith of Richmond, Virginia, gave $350. 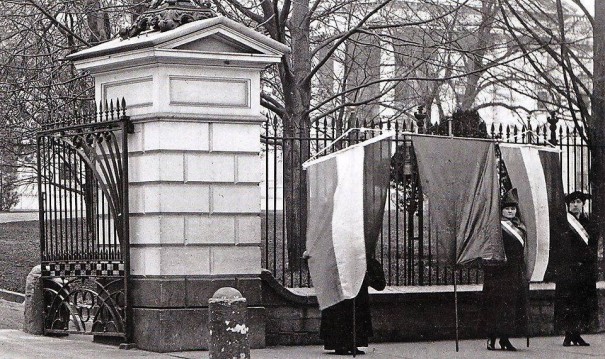 Not all donations are in the form of money, of course. Two gentlemen stopped by briefly to give boxes of candy to the picketers as a sign of their support, and an elderly woman donated many hours on the picket line, even though the “official” pickets were initially reluctant to accept her offer because she wasn’t dressed warmly enough. But she told the Congressional Union members:

For twenty years I have been in the civil service… They advance the men over the women there. You women of the Union exposed the civil service two years ago, and now I want to work with you.

She was then warmly accepted into the ranks and spent the rest of the day as a 13th Sentinel.

The day’s most appreciated non-monetary donation arrived in the form of a large shipment of oilcloth raincoats. They’re big, heavy, strictly practical and not at all in the typical style of women’s rainwear. But they certainly seem capable of fulfilling their intended purpose of protecting the pickets from even the worst storms that the city will inevitably throw at them. Of course, the hats with the wide brims at the back my make passersby wonder if the White House is under siege by suffragists or being protected by the Fire Department, but the Congressional Union’s purple, white and gold banners, surrounding others bearing the message: “MR. PRESIDENT, WHAT WILL YOU DO FOR WOMAN SUFFRAGE?” should clear up any doubts.

Though the temperature dropped from 22 to 17 degrees during picketing hours and strong winds increased the chill, President Wilson continues to warm to the picketers. When he encountered them for the first time day before yesterday, he remained expressionless and looked straight ahead. Yesterday, he gave them a slight smile as he passed through the gate. Today he gave a big smile, and tipped his hat. Whether this daily escalation means he’s slowly being converted into a supporter of the Anthony Amendment or just having progressively better mornings on the golf course is not known, but it seems a good sign. According to Mary Gertrude Fendall, “Officer of the Guard” for today’s detail:

We are glad that the President smiled on us. We appreciated also the invitation extended to us yesterday by the President to come into the East Room out of the shivering cold weather. Perhaps we have succeeded in making the President take notice of us in such a way that he may help get us the Federal suffrage amendment at this session of Congress.

(It should be noted that the pickets politely turned down the President’s invitation to come inside.)

Future plans of the picketers are ambitious. It was announced today that on March 4th, the date of President Wilson’s second inaugural, there will be not just the usual twelve pickets (three on either side of the East and West gates of the White House), but a thousand protesters surrounding the entire Executive Mansion. If so, this will not be the first time suffragists have tried to impress President Wilson with their numbers.

Four years ago, on March 3, 1913, Alice Paul coordinated the National American Woman Suffrage Association’s massive suffrage march and pageant here the day before Wilson’s first inauguration. She’s still in D.C., and as dedicated as ever to the cause of “Votes for Women.” She now heads the Congressional Union for Woman Suffrage, and has been freed from the constraints of the more conservative National American Woman Suffrage Association. Wilson is still President, and though women have won full voting rights in eleven States, they are still denied equal suffrage in thirty-seven. So today, just as four years ago, the struggle goes on, only using new and more militant methods.