May 6, 1911: Anyone who still doubts that the woman suffrage movement is rapidly gaining support must have been a long way from New York’s Fifth Avenue earlier today. 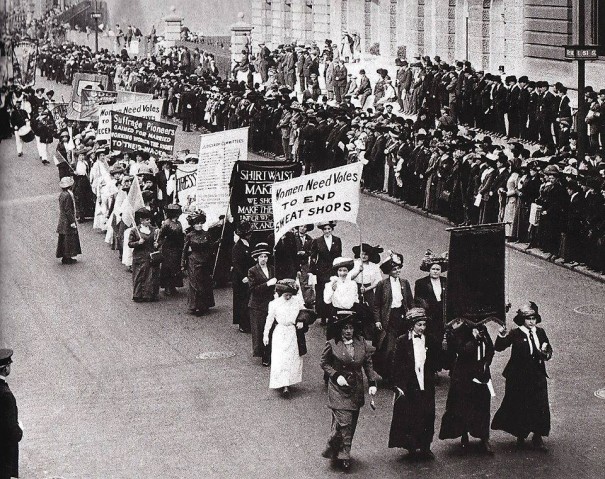 The turnout for this year’s annual suffrage parade was unprecedented, with at last 3,000 marching from 57th Street to Union Square. That’s nearly eight marchers for every one last year. At the end of the parade, speakers addressed a friendly crowd of about 10,000, an equally stunning turnout.

Reverend Antoinette Brown Blackwell, the first woman in America to be ordained a minister, turned out to be only the second oldest participant at 85. She is five years younger than the great-grandmother who came all the way from Martha’s Vineyard in Massachusetts to show her support for suffrage. The youngest suffragist was Sarjo Martina, one year old, a member of the “Future Voters” delegation, who was pushed along in a stroller.

The procession was headed by Inez Milholland and two women carrying a banner inscribed: “FORWARD OUT OF ERROR, LEAVE BEHIND THE NIGHT; FORWARD THROUGH THE DARKNESS, FORWARD INTO LIGHT,” from the hymn “Forward ! Be Our Watchword.” The three women were followed by Scotch bagpipers, the first of the parade’s many musicians, then several floats (a new innovation this year), and women representing many different occupations and other groups.

The National College Equal Suffrage League delegation was led by Reverend Anna Howard Shaw, who has been President of the National American Woman Suffrage Association since 1904. These marchers were among the most colorful, with all members in caps and gowns.

The marchers received a good deal of applause along the route, and large “Votes for Women” banners could be seen as the parade passed the headquarters of Alva Belmont’s Political Equality Association at 505 Fifth Avenue. Belmont herself was seen smiling as she observed the parade.

The Women’s Trade Union carried a banner reading: “WOMEN NEED VOTES TO END SWEAT SHOPS,” and the Shirtwaist Makers behind them trimmed their banner in black in memory of the victims of the recent Triangle fire.

The Woman Suffrage Party was well represented, and as a sign that spectacles such as this are no longer considered radical or militant, Maud Nathan, one of the party’s most influential members, gave the event her blessing. She had strenuously objected to the two previous and much smaller parades. In 1908 twenty-three members of the Progressive Woman Suffrage Union marched despite being refused a parade permit, and last year four hundred marched. But as a sign of the growing prestige and influence of suffrage groups, the permits for the 1910 and this year’s parade were obtained without difficulty. Nathan was among the participants today, and happily accepted a bouquet of flowers tossed to her by a male spectator.

Harriot Stanton Blatch and her Women’s Political Union organized the parade, and a large contingent of that group’s members was present. Their colors of purple, green and white could be seen throughout the parade in many delegations. The march ended at Union Square, with the biggest ovation reserved for the Men’s League for Woman Suffrage, whose members required the most courage to march. Many of the women’s delegations ran out to greet them waving banners and clapping loudly as the men arrived.

Union Square was packed with those waiting to hear what the suffragists had to say. After the “Woman Suffrage March” was sung, speeches began from locations all around the Square. The orators got on top of anything they could improvise to address their audiences. It was proudly noted that Washington State voters had approved a woman suffrage referendum on November 8th by an almost two-to-one margin, and though it had been 14 years since any previous victory, the stalemate was now over.

The New York State Legislature will be under siege to put a referendum on the ballot here, and an all-out effort will be made in California to pass a suffrage amendment to that State’s constitution at a special election on October 10th. Despite feeling exhausted after all of today’s activities, everyone feels that it was well worth all the time and effort necessary, and that next year’s parade will be even more spectacular – and have another victory to celebrate!