March 5, 1919: The “Prison Special” arrived in Chicago tonight, carrying suffragists who have served time in Washington, D.C.’s District Jail, or Virginia’s Occoquan Workhouse for picketing the President along the White House fence.

The special railroad car, chartered by the National Woman’s Party, left the nation’s capital on February 15th and has given these brave activists a chance to state their case to huge crowds and numerous reporters around the country. They have used this opportunity to detail their prison ordeals and explain why they have had to resort to even more militant – though nonviolent – tactics, such as burning President Wilson’s speeches in large ceremonial urns in front of the White House fence.

The tour has been a big hit ever since its first stop in Charleston, South Carolina, where it generated the biggest mass meeting in the city’s history. The purpose of militant actions, from picketing to the speech-burning “Liberty Bonfires” is to secure action in Congress over the stalled Susan B. Anthony (nationwide woman suffrage) Amendment, center the attention of the country on the struggle for the vote, and remind people that President Wilson and his Democratic Party have been responsible for the failure of the Anthony Amendment to gain approval by the required 2/3 of House and Senate before being sent to the States for ratification. 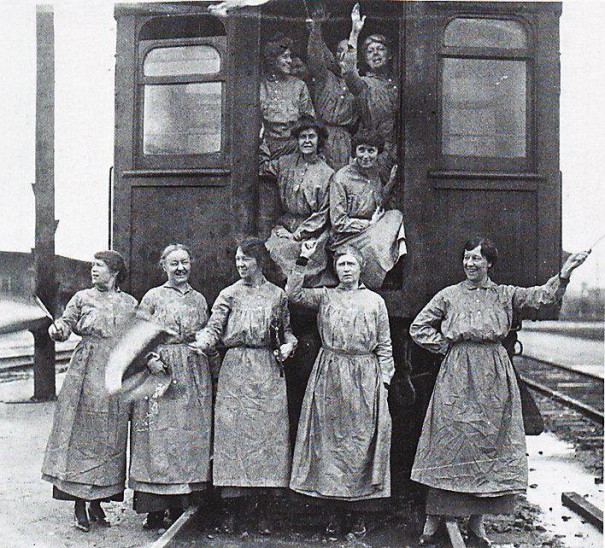 I had been fasting for six days and nights when they started in on me. It was a terrible experience, a horrible attempt to break my will. Five men and two women were employed in doing it. The men would pin me to the floor, several of them holding my arms by my sides. If I struggled they would sit upon me. And while the men held me the women would insert a tube in my mouth through which a fluid of egg and milk would be forced into my stomach. I was weak from the fasting, but whenever I was strong enough I would refuse to let them insert the tube into my stomach that way. Food so taken is not nourishing. It is not meant to be. It was done simply to break my will.

Their jailhouse experiences certainly didn’t rob the suffrage prisoners of their sense of humor, as can be noted from the songs they sang in prison and shared here tonight. This one is to the tune of “I’ve Been Working On The Railroad.” S.B.A. is the Susan B. Anthony Amendment, Zinkham is the D.C. Jail’s warden, and “Woodrow” refers to President Wilson:

We’ve been starving at the Workhouse, all the live long day.

We’ve been starving in the Workhouse, just to pass the S.B.A.

Rise up so early in the morn;

Don’t you see the Senate moving,

The other women on the train also have compelling stories and will tell them at a mass meeting in the Congress Hotel tomorrow night, though some will make a quick trip to Milwaukee in the afternoon. Meanwhile, the National Woman’s Party’s struggles continue.

Last night in New York City, some N.W.P. members who were attempting to peacefully demonstrate outside the Metropolitan Opera House, where President Wilson was speaking, were assaulted by police, soldiers and sailors. The women had gathered from all around the nation to express indignation that the President was leaving the country to campaign for democracy abroad while letting the Constitutional amendment that would bring democracy to America’s women languish. It failed by a single vote in the Senate on February 10th, which Wilson could surely have coaxed from a member of his own Democratic Party had he chosen to exert his full influence.

Fortunately, the Democratic-controlled 65th Congress ended yesterday, and as a result of the National American Woman Suffrage Association’s targeting of specific anti-suffrage Senators for defeat in the November elections, and the National Woman’s Party’s targeting of all Democrats as the “party in power” and therefore responsible for the failure of the Anthony Amendment to pass, there now appear to be enough votes in both Senate and House in the new Republican-controlled 66th Congress for passage of the Anthony Amendment.

But even though there is reason for optimism that there is now a large enough Republican majority to overcome entrenched Southern Democratic opposition, nothing is being taken for granted, and the campaign will go on at full force until passage of the Anthony Amendment is achieved.