December 12, 1932: If it seems as if women are losing jobs even faster than men since the current Depression began and that women who are still employed are being exploited far more than before, there is now solid evidence to back up that impression.

Mary Anderson, head of the Women’s Bureau of the Department of Labor, today brought out figures from several surveys around the country confirming these suspicions. 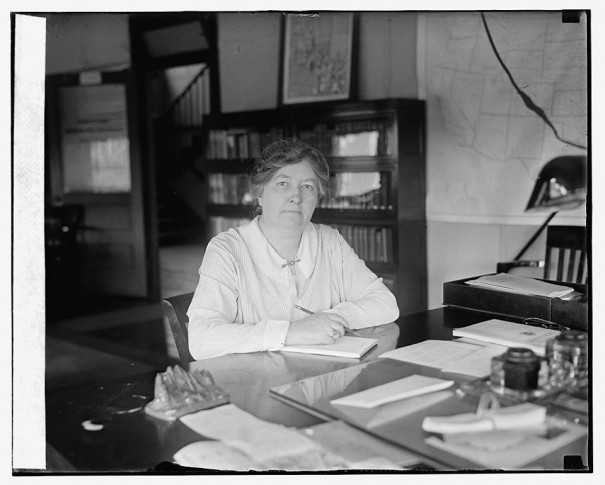 In New York and Illinois, employment records show that the number of women who lost jobs was greater than that of men in a large number of industries employing both men and women, and was also the case in virtually all occupations in which a majority of workers are female. Women in executive or supervisory positions faced the worst cutbacks.

A survey last year showed that about 20% of women in the country’s 19 largest cities were out of work, and in eight of these cities the percentage was even greater. The overall unemployment rate for the U.S. that year was 16.3%, up from 3.2% in 1929. This year the jobless rate hit 24.1%. An unemployment census taken in April, 1930, just six months after the current economic downturn began, already showed 668,661 women out of work, 10% of whom were heads of families.

Wage cuts have been a widespread phenomenon during the past three years, and though a New York State survey showed the salary declines for women have actually been slightly less than those for men (21.5% vs. 22.5%), the impact has been much greater, because women were earning substantially less than men to begin with. Interestingly, figures published by the Minimum Wage Board of Ontario show women’s wages in that Canadian Province have declined by only 1.7%.

Just how low some women’s salaries have slipped in the U.S. is shown by a recent survey of 7,800 women in the garment-making industry, made at the request of Connecticut’s Democratic Governor, Wilbur Cross. Many women were paid from $4 to $6 for a 48 to 50 hour week. The wages paid to those who do piecework couldn’t be determined precisely because no records were kept.

The practice of discriminating against women in general – and married women in particular – in the workforce clearly predates the current economic crisis, but has become more widespread and overt since 1929. The National Woman’s Party has been fighting for the rights of women in the workforce for many years, and is presently trying to repeal Section 213 of the Economy Act of 1932. It states that when reductions in personnel are needed in Federal Government departments, those who have spouses working for the Government should be terminated first.

Though apparently sex-neutral, Section 213 is really a “force the wives to resign” law. Since men tend to be promoted faster and higher, and therefore earn bigger salaries, if only one Government job is allowed per couple, it’s the wife who will quit. The alleged justification for this policy is to “spread the jobs around” among families, but if that was the Act’s true purpose, the one-job-per-family rule would also apply to fathers and sons, brothers and sisters, and any family members living in the same home, not just to spouses.

In addition to working on specific legislation, the National Woman’s Party recently urged President-elect Roosevelt to be the first to appoint a woman to his future Cabinet:

The women of America earnestly urge you to include women among those whom you appoint, and urge that these women be truly representative of women – women who believe in equality for men and women, women who are aware that equal and effective co-operation between men and women is a vitally essential principle of representative government.

Regardless of whether Mr. Roosevelt breaks the precedent of naming only men to Cabinet posts or not, women workers are about to get a strong voice in the White House. Just two weeks ago, soon-to-be First Lady Eleanor Roosevelt made an appeal for assistance to women hurt by the Depression when she spoke at a benefit in Carnegie Hall sponsored by the Educational Department of the Women’s Trade Union League. Then, after attacking the “blindness of a few people who perhaps do not understand that, after all, the prosperity of the few is on a firmer foundation when it spreads to the many,” she optimistically noted:

I feel in the last few weeks a lifting of the spirit of the country, a new sense of hope,” and predicted that “we are going through a time when I believe that we may have, if we will, a new social and economic order.

Hopefully, women will be an integral part of the “new social and economic order,” and the Roosevelt Administration will make great progress in ending both the Depression and discrimination against women.