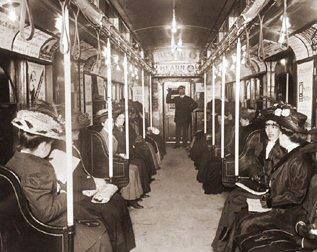 Whether the special cars will be adopted by the five-year-old Interborough Rapid Transit Company’s subway system and be established on New York City routes is still unknown, though it seems doubtful. Hearings were held two weeks ago and with the exception of the Women’s Municipal League, host for the discussion, there was strong opposition.

Ida Husted Harper, author of “The Life and Work of Susan B. Anthony,” acknowledged that there were substantial problems for commuters: “It is an outrage for people to be subjected to what they have to endure in the way of transportation in New York.” But she also said:

I am opposed to the plan principally because by setting aside one car for women, men would consider that all the rest of the train belonged to them. Then, when the overflow from this segregated car tried to get into the others, the men would put up the cry that women were encroaching on their domain. We are hearing entirely too much nowadays about ‘women’s invasion.’

Harper said that she was “constantly surprised at the number of men who do give up their seats and try to help women both in the subways and the surface cars,” and that the only hope is to rely on the “kindness and consideration” of the majority of men in the cars.

Lillie Devereaux Blake, veteran suffragist and President of the Legislative League, said of the proposal:

I am opposed to it. I don’t think our New York men are such beasts that we can’t sit in the same car with them. I like men. Of course, they don’t give us all we want them to. They don’t let us vote, for instance, but they will in good time and even now they’re pretty good to us. I think it would be most unpleasant if we had a car to ourselves.

Florence Kelley, Secretary of the National Consumers League, testified that: “The last thing in the world women want is to be segregated.”

The experiment will continue to see if its popularity lasts.

UPDATE: Though initially popular, the Hudson & Manhattan Railroad’s women-only cars saw ridership decline and the experiment lasted only until July 1st. They were never adopted by New York’s subway system, though the Women’s Municipal League tried to get the Public Service Commission to order it. On August 3, 1909, the Public Service Commission voted 2-1 against ordering the Interborough Rapid Transit Company to have a special car for women on all express trains during rush hours and cited the fact that they had not proven successful on the Hoboken run.

Commissioner Eustis, the one commission member who though the idea should at least be given a trial, admitted that the public was divided over the issue: “Almost an equal number of people [to those advocating women’s cars] stated that men are the best protection that women have in a crowded car and that they prefer to ride in cars where men and women are together. That while there are rare occasions where some brute will take advantage of the situation to insult a lady, on the other hand the gentlemen are the best protection the ladies have against such conduct.”