April 29, 1905: “Equal pay for equal work” is the demand of an insurgent group of women teachers led by Anna Louise Goessling of P.S. 44 in Brooklyn, New York. 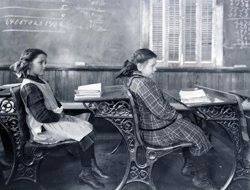 She and some of her fellow members of the New York Class Teachers’ Association have just printed up and sent out a circular to all the women teachers of New York City saying:

The time is ripe to establish the principle of equal pay for equal work. Why should a woman’s minimum salary be $300 less than a man’s and why should her maximum salary be $960 less than a man’s? The women teachers do the same work, are exempt from no rules or duties and most of them have fathers, mothers, sisters or brothers dependent upon them. Why, then, should women not receive the same salaries? Let us make a strong, united effort to bring about a consummation of what is so manifestly just.

Of course, the first task of the C.T.A. women is to replace the male president of their group, who does not support their goal, with someone who does. Fortunately, an election is scheduled for May 9th and since women outnumber men in the group by 30 to 1, as the only woman running, Goessling’s chances of winning are quite good.

The present C.T.A. President, George Cottrell, was understandably less than enthusiastic about today’s development. Upon being presented with a copy of the circular, which came as a surprise to him, he said: “I consider this an insult. It implies that I have not done my work properly.” The rebel delegation that called upon him was not surprised by his reaction. When the “equal pay” proposition had been suggested last fall, he “frowned upon it” and said that it would only result in the lowering of the men’s salaries.

So, after due deliberation, the insurgents have now taken matters into their own hands. With this kind of determination behind their cause and both logic and justice on their side, it will surely not be long until women win equal pay as well as equal suffrage.