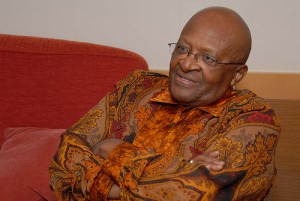 Archbishop Desmond Tutu of South Africa has called for the decriminalization of homosexuality everywhere in the world as a necessary step in combating HIV/AIDS. The archbishop wrote in The Lancet last week, arguing that increasing acceptance and reducing stigma of homosexuality is a crucial step in the fight against HIV/AIDS. His statements appeared in The Lancet as part of a series on HIV transmission, on the eve of the 2012 International AIDS Conference in Washington, DC.

“I have no doubt that in the future, the laws that criminalize so many forms of human love and commitment will look the way the apartheid laws do to us now–so obviously wrong. Such a terrible waste of human potential,” the archbishop said. His statements coincide with his continued efforts to combat HIV/AIDS through treatment and research with his organization the Desmond Tutu HIV Foundation in Cape Town, South Africa. His letter was published the same week as protestors flooded the streets of Johannesburg on Nelson Mandela’s 94th birthday to raise awareness of anti-LGBT hate crimes. At least five anti-LGBT murders have occurred in Johannesburg within the last two months alone.

A paper published in The Lancet series by an international team of researchers, led by Professor Chris Beyrer of the Johns Hopkins Bloomberg School of Public Health, also called for homosexuality to be decriminalized in all countries. “In too many settings in 2012, MSM [men who have sex with men] still do not have access to the most basic of HIV services and technologies such as affordable and accessible condoms, appropriate lubricants and safe HIV testing and counseling,” they said. “The struggle for equity in HIV services is likely to be inseparably linked to the struggle for sexual minority rights–and hence to be both a human rights struggle, and in many countries, a civil rights one.”

Currently, more than 70 countries criminalize homosexuality. This week over 20,000 people from around the world are convening in Washington, DC for the 2012 XIX International AIDS Conference.