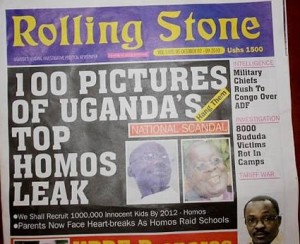 David Kato, a gay rights activist in Uganda, was beaten and killed in his home yesterday. Kato worked for Sexual Minorities Uganda and was a vocal critic of the Anti-Homosexuality bill, which would impose life sentences or the death penalty for gay people.

In October, Kato was included in a list of Uganda’s “top homosexuals” published by the Rolling Stone, a Ugandan newspaper unconnected to the same-name American magazine. The newspaper also published the addresses of gays and lesbians in Uganda and a yellow banner on the side reading, “hang them.” The newspaper stated that homosexuals are raiding schools and recruiting children. Since the article’s publication, at least four gay people on the list have been attacked and others are in hiding.

Maria Burnett, a senior researcher at Human Rights Watch, stated, “David Kato’s death is a tragic loss to the human rights community. David had faced the increased threats to Ugandan LGBT people bravely and will be sorely missed.”

Homosexuality is illegal in most African countries with the exception of South Africa, which recognizes gay marriage, but even there, anti-gay practices such as “corrective rapes” on lesbians, are commonplace.