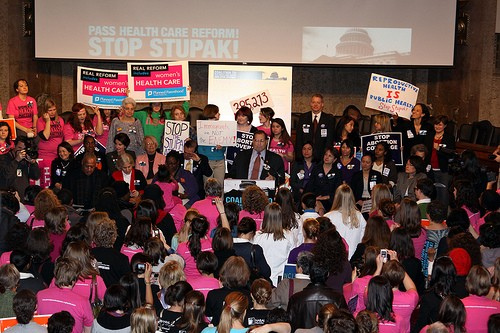 News broke late Friday night that Rep. Bart Stupak (D-Mich.) was brokering a deal with Speaker of the House Nancy Pelosi to ban all abortion coverage in the health-care reform bill.

You may be feeling deja vu. Backed by the U.S. Conference of Catholic Bishops, Stupak pulled the same trick–an 11th hour meeting with Pelosi–to get his ban into the first House bill.

The current health-care bill already complies with the 1976 Hyde Amendment outlawing federal funding of abortion. Stupak wants to go a step further and ban participating insurers from ANY abortion coverage.

Here’s what we know:

Clearly, the fate of the bill is still up in the air.

Here’s what we can do (from the Feminist Majority):

Let Congress and the White House hear loud and clear right now this historic weekend – NO DEALS with Stupak or the Catholic Bishops. Our pro-choice House Leaders are standing strong. Keep them strong.

Call your Representative and House leadership NOW. Women are watching and will NOT go backwards.

The vote is very close. Every vote counts. Millions of women’s lives are on the line. Pass health care. No last minute deals. Stop Stupak!

Check back here for more updates.