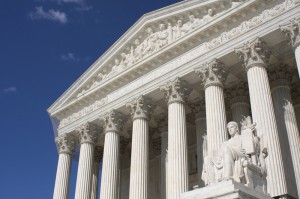 The Supreme Court has delayed its decision on whether or not it will hear a case on same sex marriage. None of the possible seven cases appeared in the orders list [PDF] released this morning that details which cases the Court will take and the ones they have rejected.

Cases being considered range from the inclusion of same-sex partners on federal and state health insurance policies to Social Security benefits to the basic legal right to marry. The Supreme Court has discussed taking these kinds of cases before, but same sex rights advocates were hopeful that a closed meeting on Fridaysuggested that the Court may see a case within the next year. For a case to appear before the Supreme Court, four judges must vote in favor of taking the case.

None of the seven cases were rejected by the Court, which means the Court could still choose to take one of the cases at the next closed conference on December 7th. At times the Court has delayed a decision in order to give the issue further consideration, according to Reuters.