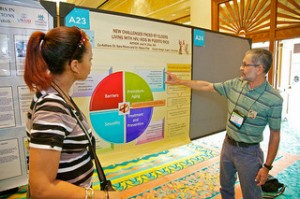 Hillary Clinton announced over $150 million in new US initiatives to combat the global HIV/AIDS pandemic. The statement was made at a keynote address during the International AIDS 2012 Conference which is being held in Washington, DC this week.

The US territory also just received $17million to support prevention and treatment programs in urban areas. Over 44, 000 people out of the island’s population of 4 million are HIV positive.

The number of people waiting for medication is not known.