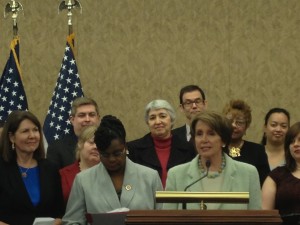 Late last night, the House Rules Committee decided to bring the inclusive Violence Against Women Reauthorization Act (VAWA) to the House floor for a vote – provided that a restrictive House substitute bill is rejected first.

House leadership announced a substitute bill last week that guts necessary protections for students, LGBTQ individuals, immigrants, and Native Americans from the Senate bill. A similar “fake” VAWA was proposed by House leadership last year in an attempt to block inclusive protections, and instead allowed VAWA to expire at the end of the year without even seeing a vote.

However, the substitute bill has triggered an outcry from both House Democrats and Republicans, in addition to criticism from the White House and women’s rights organizations. At a press conference yesterday, Minority Leader Nancy Pelosi led Democratic and women’s rights leaders in decrying the House’s attempt to restrict protections. Representative Gwen Moore (D-WI), told the media “How can we justify turning battered women away because of their sexual orientation? “How can we throw our Native American women under the bus?” Also at the press conference Lauren Dunn, currently a law student at the University of Maryland who is a survivor of a gang rape by two undergraduate students, told reporters “Ending domestic assault is not about politics. Ending violence against women is about justice “justice for victims like me.”

As determined by the House Rules Committee, if the substitute bill is defeated the House will then immediately vote on the inclusive bill as passed by the Senate. Reportedly, the restrictive substitute bill is likely to fail, paving the way for the Senate bill to pass with bipartisan support. If so, the bill could go before President Obama by the end of the week.