After facing sharp backlash, TIME magazine issued an apology over the weekend for including the word “feminist” on its poll of words to “ban” in 2015. 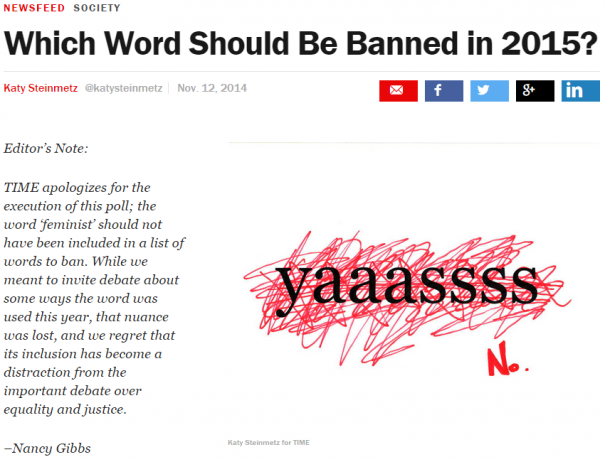 “At last, TIME comes to its senses,” said Feminist Majority Foundation President Eleanor Smeal. “Obviously ‘feminist’ is a worldwide movement for equality of women that cannot and must not be trivialized. Too many women’s lives depend on it. It’s very important that leaders from every walk of life, not only declare they are feminist, but help to empower women and to end the violence against and exploitation of women.”

The full apology, which is included as an editor’s note above the poll, reads,

“TIME apologizes for the execution of this poll; the word ‘feminist’ should not have been included in a list of words to ban. While we meant to invite debate about some ways the word was used this year, that nuance was lost, and we regret that its inclusion has become a distraction from the important debate over equality and justice.

The original TIME poll was created to have users vote on which popular Internet slang word was most annoying and should be “banned” for 2015. The list included “yaaassss,” “bae,” “turnt,” and “basic.” Activists argued the inclusion of “feminist” on the poll downplayed the importance and the work of the feminist movement.