There is no doubt that the recent revolution in Egypt got the wheels of the Arab Spring rolling. But just as quickly as women flooded the corners of Tahrir Square and the streets of Cairo in the hopes of a democratic Egypt, their voices were sidelined.

This is not uncommon. Even in conservative countries, we frequently see women come out in full force during political protests with little to no objection from men. And this was not a first for Egyptian women, who were heavily involved in Egypt’s 1919 revolution.

It is after the euphoria fades, after the dictator is placed under house-arrest, when the political blueprint of a country is being determined that women are nowhere to be heard. We repeatedly see this. From Bangladesh’s ’71 War of Independence, to Iran in ’79, to Libya, Syria, and parts of the Middle East today. Where are the women at the decision-making table? Where are the women when it comes to forming new governments? 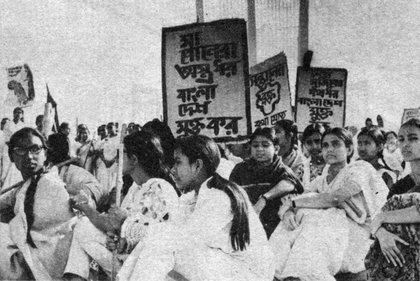 Women may be a consistent feature of the ongoing electrifying protests in the Middle East, but the one thing that has not changed is how women are forced back into the domestic sphere when the big boys (aka military) with their guns come to town. We are still fighting to play a role in the aftermath of revolution..

This brings us to post-Mubarak Egypt. Rumors of virginity tests being conducted on female protesters while in custody were rampant and were even reported by Amnesty International. These rumors have just been confirmed by a high-ranking Egyptian General who also added:

The girls who were detained were not like your daughter or mine. These were girls who had camped out in tents with male protesters in Tahrir Square, and we found in the tents Molotov cocktails and drugs.

Now, before you gasp in shock and disgust over this statement, consider who it comes from. Noted Egyptian feminist writer Mona Eltahawy points out that we should not be surprised at all that this general, speaking on condition of anonymity, would say something like this.

Eltahawy states that aside from Egypt’s staggering sexual harassment statistics, (80% of women report street sexual harassment; 60% of men admit to doing so), in 2006 Mubarak actually directed his security forces to target female activists and journalists for sexual assaults at demonstrations as a means to “shame them back home.” During a religious festival in 2007, mass sexual assaults against women and girls took place in Cairo while the police watched.

Nobody believed that change would come overnight with the departure of Mubarak’s regime, but men and especially women of all ages still have high hopes for Egypt. They should – like the rest of the region, the time for dictators and their dynasties is over.

Virginity tests are nothing new to Egypt. They are described as something that straddles across class and urban/rural divides. Virginity is associated with honor. These tests become something entirely different when the state is conducting them. State-conducted virginity “tests” are a testament to how Egypt’s Supreme Council of Armed Forces (SCAF), who have replaced Mubarak, are using the sexual behavior of women to once again shame women away from political protest and participation.

It may have worked in the past, but in this age of information and more importantly, social media and blogging, virginity tests are becoming a useless tactic. Women in Egypt and beyond will not stand for them anymore. Eltahawy says that it is the virginity tests which will spark Egypt’s next revolution:

There’s a thin line between sex and politics, and it is nonsense to keep repeating the mantra that Egypt’s revolution “wasn’t about gender”. What revolution worth its salt can be fueled by demands of freedom and dignity and not have gender nestled in its beating heart?

Egypt, Syria, Tunisia, Yemen, Bahrain and so on. No revolution in any nation can be transformational or sustainable until we identify the gender factor, and uproot patriarchy. Fighting for democracy and fighting against patriarchy go hand in hand.

It is time to admit that, and finally let gender out of revolution’s closet.