Last Thursday, Wal-Mart filed a complaint with the National Labor Relations Board to block Organization United for Respect at Walmart (OUR Walmart) protesters from picketing outside of stores on Black Friday.

Walmart claims that OUR Walmart actions planned for Friday are part of continuing protests by United Food and Commercial Workers Union (U.F.C.W) and would be illegal under the National Labor Relations Act since the protesters have exceeded the maximum 30 days of permitted picketing. OUR Walmart was considered a subsidiary of the U.F.C.W. as of 2011. Yet, Jill Cashen, Communications Director for the U.F.C.W, insists that OUR Walmart has “grown and gained independence” and since then has become their own group.

Since the labor board often takes months to review and rule on complaints, it is unlikely that Walmart will receive an injunction by Friday. However, according to Angela B. Cornell, Director of the Labor Law Clinic at Cornell Law School, this recent measure is likely meant to be a warning against those employees considering action in what Walmart insists is “illegal picketing”. 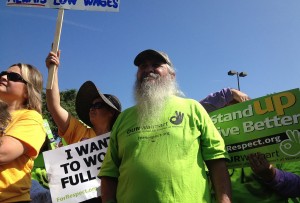 In response to the action, Cashen has said, “Walmart is grasping at straws . . . there’s nothing in the law that gives an employer the right to silence workers and citizens.” William B. Gould IV, former chairman of the labor board under the Clinton administration remarked in the New York Times “I don’t see this translating into a great deal of success in terms of unionizing Wal-Mart or in terms of being particularly effective in improving conditions. But I must say if [Wal-Mart has] gone to the N.L.R.B. on this, that must show that Wal-Mart is really concerned.”

OUR Walmart is trying to recruit a wide variety of allies for the action. They are working with religious leaders about holding prayers vigils at Wal-Mart locations in support of better worker treatment and are preparing fliers that community and civil rights groups can use to publicize the event.

Last month, Walmart employees in 12 states walked off the job in protest of working conditions and wages. Additionally, current employees of Walmart stores in Tennessee, California, and Texas have filed class-action lawsuits against the corporation on the basis of sex discrimination.