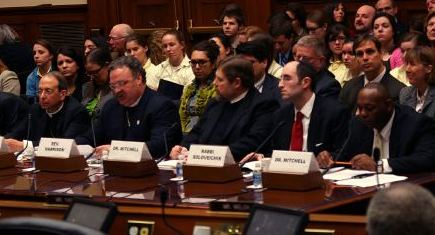 Congresswoman Carolyn Maloney’s (D-NY) now-infamous words have gone viral paired with a picture of last Thursday’s all-male panel at the hearing on contraception coverage by religious institutions. The hearing, “Lines Crossed: Separation of Church and State. Has the Obama Administration Trampled on Freedom of Religion and Freedom of Conscience?” was a circus from start to finish. The hearing was orchestrated by Chairman Darrell Issa (R-CA), who did not approve any witnesses for the minority to testify on behalf of the countless women who would benefit from the birth control mandate requiring insurance providers, not the Catholic Church, to pay for contraception in the case of religiously affiliated institutions such as hospitals or universities. Congresswomen Maloney and Eleanor Holmes Norton (D-DC) walked out after appealing Issa’s decision to reject testimony from the minority’s chosen witness Sarah Fluke, a 3rd year law student at Georgetown, concluding that she was unqualified to speak at a hearing he claimed was about “religious liberty,” and NOT about contraception coverage, or “women.”

I ground my teeth through most of the panel’s testimony, beginning with Bishop William Lori’s “pork in a Jewish deli” analogy: “Well you wouldn’t force a Jewish deli to serve pork would you?” and ending with Craig Mitchell’s, Ph.D. claim that the Affordable Care Act is “not good for America.” –I’m sorry, what?

While each Democratic representative noted the clear absence of women on the panel and questioned the political agenda of the Chairman and witnesses, each Republican representative insisted that this issue is “not about women,” and “not about contraception.” Time and time again, I heard each witness claim that the new mandates “substantially burden our religious freedom” and yet they refused to acknowledge the issues significantly affect the lives of countless American women regardless of denomination.

When questioned about whether non-religious employees or clients of religiously affiliated institutes and organizations would be granted access to contraceptive coverage without co-pays, each witness essentially stated that because the mission and goals of the church are clear, those who choose to work there must abide by the teachings of Catholicism. Tough luck doctors, employees, and students of these institutions! Just do without contraception, or go elsewhere!

My heart sank as every Democratic Representative tried valiantly to pose thoughtful and significant questions regarding women’s health, only to have their questions and statements shut down and dismissed as irrelevant to the topic of religious freedom. It seemed the panel would always revert back to denying that this was an issue of women’s health at all, despite that fact that women are the ones being affected by these proceedings.

After almost 3 hours of testimony and questioning, Congressman Gerry Connolly (D-VA) took his five minutes to reflect  about the nature of this hearing, and to speak for the silenced women in the room and all across America:

“I believe today’s hearing is a sham… Here you are being asked to testify about your rights being trampled on, an overstatement if there ever was one, while you’re on a panel and your participation on the panel makes you complicit in of course the trampling of freedom because we were denied on this side of the aisle ANY witnesses who might have a different point of view…And I think that’s shameful. I think it actually contradicts exactly what you think you’re here to testify about. And I think it taints the value of this panel that could’ve been a thoughtful discussion, [he points at the panel] but it’s not… I think this is a shameful exercise and I am very sad that you have chosen to participate and be used the way you’re being used…Shame… Making charges that are just outlandish and frankly beyond the panel serves no purpose other than political demagoguery in an election year. And men and women of the cloth, it seems to me, ought to run, not walk away from that line.”

Thankfully there has already been a lot of backlash to this conservative production. It becomes harder and harder to ignore the blatant sexism in these hearings and debates when the rights of American women, especially concerning health care, are dictated by men who exclude women from the conversation if their opinions do not support conservative ideology. Clearly, the war has just begun.