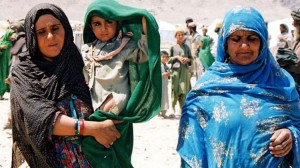 Afghanistan is in deplorable condition. There’s no disputing that.

Some feel that we should just walk away.

We cannot endorse this position because the cost to women and girls would be too high and the U.S. responsibility for the current failed state of affairs in Afghanistan is too heavy.

If the U.S. were to pull out of Afghanistan, the United States would be once again breaking our promise to the Afghan people, and the country would likely fall under Taliban control.

Afghans, especially the women and girls, know something about the Taliban: their oppression and horrific human rights abuses. We can never forget they stripped women and girls of all human rights — the right to education, mobility, visibility, health care, employment, the list goes on. And more recently these terrorists have destroyed hundreds of girls’ schools, killed journalists, local women’s leaders and murdered women teachers in front of their students. They have filled water pistols with acid and disfigured the faces of young girls walking home from school. No wonder only 4% of Afghans would support the Taliban returning to power and 58% think they pose the biggest danger to the country. (BBC/ABC Poll, Dec. 2008).

Since 1996, the Feminist Majority Foundation has been immersed in a campaign to support Afghan women and girls in their fight against the brutal oppression of the Taliban. Long before 9/11, we protested and helped stop UNOCAL’s proposed gas and oil pipelines that would have provided the Taliban with millions of dollars in annual fees to support their reign of terror. We joined Afghan women’s groups and other concerned citizens, launched an awareness campaign, gathered and delivered hundreds of thousands of petitions. Together we stopped the U.N. and the U.S. from recognizing the Taliban as the official government of Afghanistan.

To begin to understand the scope of the U.S.’s responsibility in Central Asia, we have to revisit the invasion of Afghanistan by the Soviet Union during the cold war years. During the war against the Soviets, the CIA covertly supported mujahideen fighters with billions of dollars in funds, weapons and equipment. Some of those fighters later became known as the Taliban. The U.S. also backed and funded vicious warlords who committed gross human rights abuses. A few of them are now members of the Afghan cabinet and parliament.

Once the Soviet Union was defeated, George Bush Sr., then President, promised the U.S. would help Afghans rebuild. Instead the U.S. walked away.

Afghanistan erupted into a devastating civil war. The Taliban emerged “victorious” with help, it is believed, from Pakistan and its Intelligence Service, the ISI.

During the period from the Soviet Invasion (1978) through 2001, between 5 and 7 million Afghans fled the country of some 26 million. The Feminist Majority Foundation sent a team to Pakistan to interview refugees who were fleeing from the Taliban over the Afghan border. Afghans were the single largest refugee population in the world. They told our team of the atrocities being committed. Refugee conditions and those within Afghanistan were abominable. The country was also suffering from a horrible drought. Some experts believed one million Afghans would starve to death. Prior to 9/11, the Feminist Majority Foundation urged the increase of food allotments to the World Food Program for Afghans suffering from the Taliban and the drought. We also tried to get the Taliban listed as a terrorist organization — to no avail.

After 9/11, the U.S. bombed Afghanistan, the Taliban were deposed, and the second Bush administration promised a Marshall Plan to rebuild Afghanistan.

As long-time peace activists, we did not support the bombing of Afghanistan after 9/11. As a member of Win Without War, we opposed the war in Iraq for many reasons. But let’s be clear — it was directly after the Bush administration abandoned Afghanistan to invade Iraq that conditions further deteriorated into the mess we’re facing today.

Given that non-violence is part of our mission statement, we, at the Feminist Majority, never expected to be asking for more security in the form of international peacekeeping troops (ISAF) back in 2002. (It is this outdated fact sheet that Sonali Kolhatkar and Mariam Rawi cite and we thank them for reminding us how important it is to keep our website updated.) But when we traveled to Kabul after 9/11 to find out what the U.S. could do, security is what Afghan women wanted first and foremost.

The Afghans we spoke with were more than gracious considering what our government had put them through. We were heartsick over the conditions we saw, inspired by the stories of struggle, and devastated by one question that we kept hearing over and over:

“Where were you (U.S.) after we defeated the Soviets?” They had not forgotten the first time the U.S. abandoned them.

Early in 2002, the Afghans were also extremely worried that if U.S. focus turned to Iraq, their needs would be forgotten again. Their fears were well founded.

After Bush II invaded Iraq, NATO and the U.S. did not adequately fund the redevelopment effort. Instead, the U.S. hired contractors who overcharged, botched projects, and did not come close to meeting their goals. Moreover, humanitarian aid was dispensed mostly through large international NGO’s with high overhead costs and relatively high western salaries, with little actual aid to Afghans.

In the last seven years, there have been some successes. In 2000, girls were not allowed to attend school. Last year, the U.N. reported that 6 million children attended school. More than a third were girls. 49% of health care workers are women. Women comprise 25% of civil service workers.

But make no mistake. Afghanistan is in terrible shape. The Taliban have gradually returned. Nothing is as it should be, which is why we are asking for no less than a Marshall Plan to rebuild Afghanistan, the same way we did for Germany and Japan after World War II. Afghanistan’s water, sewage, electrical, and their once proud hospital systems have been all but destroyed by 30 years of war. We bombed it. We have an obligation to rebuild it.

Though we’d prefer that all U.S. funding be spent on development aid, we cannot in good conscience advocate the immediate military pullout that some are suggesting. The 2009 UN Humanitarian Action Plan noted that in 2008, “Approximately 40% of the country, including much of the South, remains inaccessible for most humanitarian organizations.” Last year, 92 aid workers were abducted and 36 were killed, double the number from 2007. In recent public opinion polls, Afghans put security in their top three concerns right after food. Without stabilizing the country, there can be no significant redevelopment effort.

In March, President Obama announced a significant change in the Afghanistan/Pakistan strategy. He shifted the focus from Iraq to this troubled region not a moment too soon. The Taliban had taken over the Swat Valley in Pakistan and were within 100 miles of its capital. In case anyone was wondering if the Taliban had changed its ways, they promptly closed girls’ schools, began flogging young women publicly, and committed other atrocities. In Afghanistan, the Taliban nailed a 70-year-old woman to a tree for allegedly talking with the enemy.

The new administration’s strategy recognizes the need for development and reconstruction. The military appears to be changing its priorities, announcing that protection of civilians is their first priority. Virtually everyone knows that a military solution alone won’t work. Yet, we cannot ignore that security and the Taliban are among Afghans’ top concerns.

For over 12 years, we have been listening to and working with Afghan women and Afghan women’s groups to learn what they want supported. Dr. Sima Samar is the Director of the Independent Commission on Human Rights, the highest ranking woman in the government of Afghanistan. An M.D. and founder of Shuhada, which runs health clinics and schools for underserved women and girls as well as for men and boys in Afghanistan, she is also the U.N. Special Rapporteur for Human Rights in the Sudan. When she talks, we take notes. From a recent U.S. visit, this is what Dr. Samar urges and we support:

1) Human rights, especially the rights of women, must be a central focus.

2) The U.S. and Afghanistan must work together as partners with shared responsibility.

3) The U.S. must stop supporting and funding corrupt warlords who violate human rights. The culture of impunity must be stopped.

4) Security must be re-established until the Afghan army and police can take over. Private or “community” militias must not be funded.

5) Insist on accountability and transparency for aid funds and contractors.

6) Any long term plan must include job creation and development aid.

7) Women’s rights cannot be negotiated away in the name of peace. This kind of peace would not be sustainable.

We are grateful for our many friends and colleagues in the peace movement who have joined the effort to support the courageous women and girls of Afghanistan. Together, we have helped designate substantial U.S. funding for women and girls programs in Afghanistan — $367 million to date. Right now we are working for passage of the Afghan Women’s Empowerment Act with $100 million for critically needed education, employment, and health care programs and we continue to emphasize the need to fund Afghan women-led programs of Afghan nonprofits. We are also working to increase the numbers of trained midwives. Afghanistan has the second highest maternal mortality rate in the world. Only 14% of Afghan women have access to a trained childbirth attendant.

Our past governments’ failed policies over 30 years have directly contributed to the current conditions in Afghanistan. We, at the Feminist Majority Foundation, feel we owe it to the Afghan people, especially the women and girls, to keep our promises to stay this time, and help them clean up the mess.

For more information on the Feminist Majority Foundation’s work in Afghanistan, see www.feminist.org/afghan

This piece was co-written with Helen Cho, Feminist Majority Foundation Board Member. Photo by: Marsha Pereira