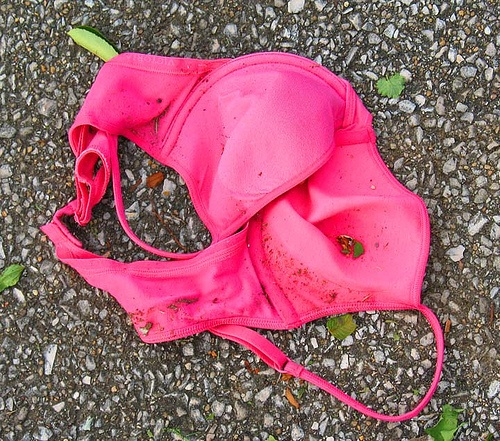 For Breast Cancer Awareness Month, the Ms. blog will be running a series of pieces devoted to the disease and activism around it.

It’s fun. It’s flirty. And it grabs a person’s eye. Shirts, baseball caps and rubber bracelets emblazoned with the slogans “Save the tatas,” “Save second base,” “I heart boobies.”

With each Breast Cancer Awareness Month that rolls around, the catchphrases seem to get more ubiquitous. Since this week kicked off another awareness month, I’ve been taking a harder look at the slogans that I once thought clever. They’re a cheeky way to get people, especially men, thinking about breast cancer, but they sacrifice the gravity of the epidemic and replace it with shallow sexual innuendo.

The whole “insert boob-related pun about breast cancer” trend reminds me of a similar obsession that overtook my Facebook newsfeed two years ago. Suddenly, all of my girlfriends’ status updates changed to “I like it on the kitchen counter” or “I like it on my desk” or some iteration of what they liked “it” on.

Eventually when the big secret hit my inbox, I realized they were naming places they liked to put their purses as a part of breast cancer awareness. The hope was that it would pique the interest of men, who would want to know what had caused the inundation of sexually provocative statuses. Though well intentioned, I didn’t see how it had anything to do with breast cancer or funding research.

These sexually colored awareness campaigns may get attention from men, but not in a way that translates to action. On top of that, they grossly underestimate men by assuming they need a sexualized gimmick to get them to care about a social cause. Men who have mothers, wives, sisters and daughters affected by the disease don’t require such tactics to make breast cancer worthy of their attention.

“Save the tatas” also reduces breasts to sexual objects instead of parts of a human being. “Save the women” should be enough to motivate people, but it doesn’t seem to have the same potential to go viral in an awareness campaign.

And let’s not forget, as E! host and breast cancer survivor Giuliana Rancic said before deciding to get a double mastectomy, “Sometimes you can’t ‘save the tatas.” In their battles against breast cancer, many women have to lose their breasts to keep their lives. Even if some opt to undergo reconstruction later on, the feeling is lost forever, which can deal a heavy emotional blow. In one of the first breast cancer memoirs of its kind, First You Cry, NBC correspondent Betty Rollin explored the devastation she felt after losing her breast to cancer and the impact it had on her sexuality. We shouldn’t forget women’s real feelings in our quest for catchy slogans.

How are women with mastectomies supposed to feel when they see these types of slogans? Are they supposed to think that they failed in some way because they couldn’t keep their breasts? Staying alive is the name of the game here, and these phrases overlook that. Not to mention that they exclude and are insensitive to men diagnosed with breast cancer, who definitely don’t have “tatas” to save.

It’s great to raise awareness, but the facts are that the number of women’s lives that breast cancer claims has not changed. It’s remained at 40,000 a year for more than a decade.

Breast cancer is not meant to be sexy. Marketing it as such trivializes it as well as stops people from understanding the disease and focusing on prevention and better treatments. The focus shouldn’t always be on “saving second base,” but on making it all the way to home plate by saving women’s lives.