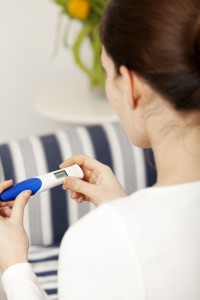 Planned Parenthood filed a case to repeal the law in the federal U.S. District Court in Madison on the grounds that it is unconstitutional because it is so vague that doctors do not know what is necessary to comply with the law. The suit is against Wisconsin Attorney General J.B. Van Hollen, Wisconsin district attorneys, and the state’s Medical Examining Board, all of whom are supposed to enforce the law.

Bruenette woman with pregnancy test at home from Shutterstock