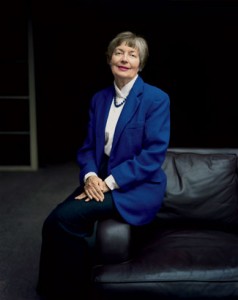 Eleven years ago, U.S. economic leaders should have listened to Brooksley Born.

Then head of the Commodity Futures Trading Commission (CFTC), Born was concerned about new and unregulated futures markets. They were growing at tremendous rates, yet their risks were not fully understood. She was especially wary of the lack of transparency in trading over-the-counter private “derivatives,” so she issued a call for comments about the need for regulation and oversight.

As Narda Zacchino and Robert Scheer point out in their piece about Born in the just-released Fall issue of Ms., instead of recognizing Born’s foresight, “they shot the messenger.” The old boys’ club of U.S. economic advisors—including former treasury secretary Robert Rubin, former Federal Reserve chair Alan Greenspan and the current director of the National Economic Council Lawrence Summers—did everything they could to stop Born from asking more questions and to block Congress from taking action.

We all know where that head-in-the-sand approach got us: into a deep recession, triggered in large part by unregulated derivatives trading.

But it’s do over time: Will the U.S. Congress listen to the echoes of Born’s voice when they tackle forthcoming legislation to better regulate the over-the-counter derivatives market?

So far, the news is frustrating. The bill that passed out of the House Finance and Agriculture Committees in October has loopholes big enough to drive billions of dollars through. “If people are paying attention they will see that there is still a house of cards and that these loopholes are going to codify that,” Sen. Maria Cantwell (D-Wash.) told The Boston Globe. Yes, there will be more regulations, but, as the legislation now stands, large banks and financial institutions can still escape much of the needed oversight.

As Born told Ms., “I did feel to some extent as though I was the little boy saying, ‘The emperor doesn’t have any clothes.’ I was absolutely mystified that both the industry and the other financial regulators did not even want to ask questions about an enormous financial market [about $600 trillion] that none of us had any insight into.”

After the financial meltdown, much insight has been gained. And more will certainly be learned when the Financial Crisis Inquiry Commission, a 10-member group appointed by Congress which includes Born, delivers its report in December 2010. But the emperor that is the U.S. Congress is still displaying a lot of naked flesh. If it doesn’t tighten regulations further when the bill comes to the floor of the House this month, and then on to the Senate, we risk a replay of the economic crisis.

“There was nothing inevitable about the current financial meltdown other than the stupidity, greed and arrogance that enabled it,” wrote Zacchino and Scheer in Ms. “The price for not heeding Brooksley Born will be paid for generations to come.”

For the complete Ms. article on Brooksley Born, “They Shot the Messenger,” look for the Fall issue of Ms. on newsstands now, or have it delivered to your door by joining the Ms. community.