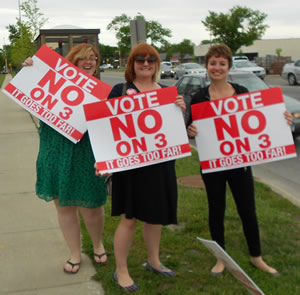 We did it! With your help, feminists made a big difference in North Dakota and pro-choice forces won BIG. Thank you for your support! And thank you North Dakota voters!

North Dakotans voted overwhelmingly – 64% to 36% – against Measure 3 the so-called “religious liberties” state Constitutional amendment that could have been a huge blow to women’s rights. Voters also resoundingly defeated a measure opposed by public school teachers and educators that would have repealed all property taxes by a vote of 77% to 23%.

Feminist Majority Foundation campus organizers were on the ground working with hundreds of North Dakotans, the statewide coalition against Measure 3, North Dakotans Against Measure 3. With your support, we organized on college campuses with North Dakota Students Voting No on 3, a statewide campaign. Our national organizing team worked on-the-ground with other pro-choice groups, student organizers, and scores of volunteers who mobilized students on the major campuses. Our signs, leaflets, and stickers, which read “Vote NO on 3, It Goes Too Far” said it all!

Measure 3 would have threatened laws against sex discrimination, domestic violence, child abuse and more. The amendment could have provided a defense to wife beaters and child abusers – who would have been able to claim their religious beliefs allow them to use violence against family members. It could have also opened the door, based on religious beliefs, to sex discrimination and the denial of birth control and other fundamental services and protections. Undoubtedly, it would have led to many court cases.

Although there was initially much confusion about Measure 3, as soon as the public learned of the potential harmful impact of Measure 3, we moved solidly ahead despite strong opposition from the Catholic bishops and the local Catholic Conference as well as the local affiliate of Focus on the Family.

Thank you for standing with us in North Dakota. We couldn’t have done it without you!