An Arizona appeals court Monday overruled an April verdict that found activist Monica Jones guilty of “walking while trans” in a case that highlighted police profiling of trans women of color. 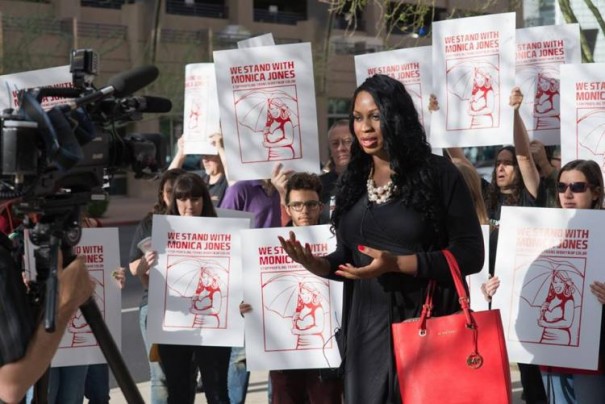 Jones, a transgender women of color who is known for organizing around sex workers’ rights, was found guilty of “manifesting prosititution” by an Arizona judge last year because she accepted a ride with two undercover police officers in May 2013. She pled not guilty and challenged the law’s constitutionality, and advocates from the region were quick to declare that Jones’ charges were political attacks on her work and her identity. Jones is an outspoken opponent of Project ROSE,  a “rescue” program sponsored by the Phoenix Police Department and ASU’s School of Social Work – where Jones was studying at the time of her arrest – that puts sex workers through religious education in exchange for dropping their charges.

In its decision, the Arizona appeals court found that Jones was not given a fair trial and that her claims that the arrest was unconstitutional should have been taken into account. Last week’s ruling allows Jones to appeal her sentence, but does not vacate her charges.

Jones is determined to press forward not only as a defendant but as an advocate for other people like herself who face police harassment and profiling on a daily basis. “This is a smaller win,” Jones told BuzzFeed about her case. “This law needs to be thrown out because it unfairly targets women, transgender women, and people of color living in poverty. Police wouldn’t [arrest] a man standing on the corner talking to a passerby.”

In the wake of nationwide protests against police brutality and violence, Jones’ case also drives home the reality that trans women of color also suffer from the systemic racism – as well as sexism and transphobia – of a lopsided police force, which comes in stark contrast to a movement focused, primarily, on violence against black men. Jones, in fact, has said that some of the street harassment she faced in her daily life came from police officers themselves.”[Police] are supposed to protect and serve the most vulnerable communities,” she said, “but police are causing the most grief and strife. If people think it’s okay for police officers to harass transgender women, people will think it’s okay for everyone else.”

“I have to fight because I am innocent,” Jones added. “And I am going to keep on standing up for what is right.”