The Asia Foundation has released their annual Afghanistan survey titled Afghanistan in 2018: A Survey of the Afghan People. It showed an improvement in the perception on the rights and participation of women and girls in society, but there are still many challenges faced by women in the region.

In terms of women’s justice, the survey is optimistic. 21 percent of women compared with 16 percent of men reportedly brought family disputes to court; this was in part thanks to the Ministry of Women’s Affairs, the Attorney General’s Office, and the police who all have specially designed units to support women in cases of violence.

There has also been a decline in the traditional practices of baad and baddal that involve the exchange of daughters; the former is when a family will give a daughter away to settle any conflicts between families, while the latter is the marriage exchange between families. There has been a drop in the percentage of Afghans who believe the practices are acceptable; 9.5 percent approval down from 12 percent in 2017 for baad, and 25 percent down from 29 percent in 2017 for baddal. On the other hand, the percentage of Afghans who believe women have the right to inherit from their fathers (mira) has increased to 90% approval. Additionally, there was a decline in the support for women in leadership positions despite the 417 women who ran for parliamentary office this year. 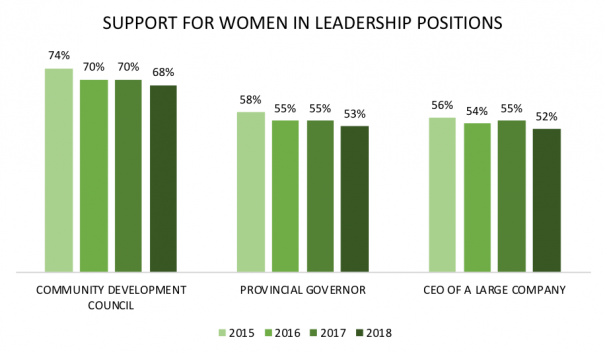 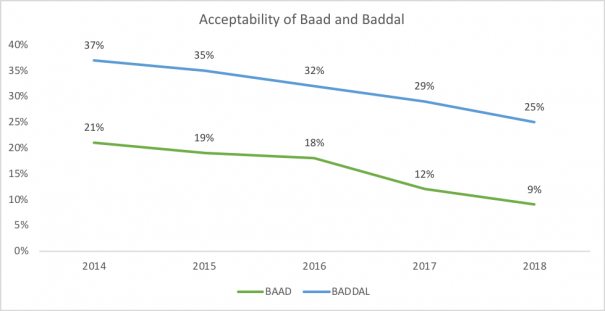 Aside from the changes in perspective on Afghan women and girls in society, the survey also detailed the biggest challenges they continue to face: lack of education, unemployment, domestic violence, forced marriage, lack of rights and poverty. Female literacy for adults is around 31.7 percent, and 3.7 million children are out of school. 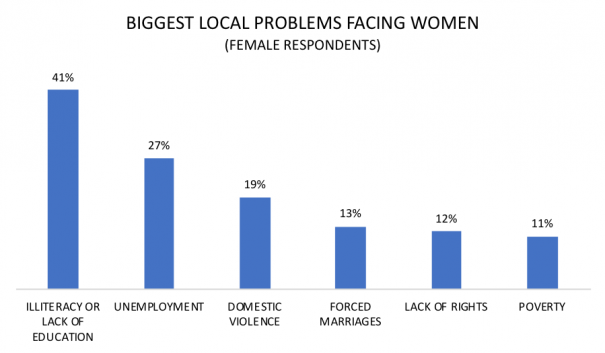 The Asia Foundation has been conducting this survey of the Afghan people for the past 14 years. This year’s survey was the largest yet, polling 15,012 Afghans, 50.3 percent of whom are men and 49.7 percent of whom are women, gauging their positions on issues ranging from perception of security and government services, to women’s issues and migration. Participants represented each major and minor ethnic group from all 34 provinces of Afghanistan.