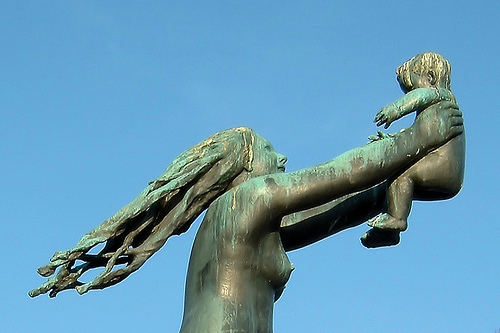 Fox News’ Megyn Kelly returned to work after three months of maternity leave, and during her first show, she pummeled shock radio host Mike Gallagher, who back in May called Kelly’s maternity leave “a racket” that was “unbelievable.” Kelly not only took Gallagher to task for poo-pooing the notion that women should be able to stay home with their newborns, but she also pointed out that the U.S. is in “the dark ages when it comes to maternity leave,” as it is the only industrialized nation that doesn’t require employers to give new mothers paid time off:

KELLY: What a moronic thing to say…Is maternity leave, according to you, a racket?

GALLAGHER: Well, do men get maternity leave? I can’t believe I’m asking you this, because you’re just going to kill me.

KELLY: Guess what honey? Yes, they do. It’s called the Family Medical Leave Act. If men would like to take three months off to take care of their newborn baby, they can. […] Just in case you didn’t know, Mike, I want you to know that the United States is the only country in the advanced world that doesn’t require paid maternity leave. Now I happen to work for a nice employer that gave me paid leave. But the United States is the only advanced country that doesn’t require paid leave. If anything, the United States is in the dark ages when it comes to maternity leave. And what is it about getting pregnant and carrying a baby for nine months, that you don’t think deserves a few months off so bonding and recovery can take place, hmm?…You can’t answer the question because there is no answer, my friend.

Kelly is spot-on. As the Project on Global Working families found during a survey of 173 countries, the U.S. is in some bad company when it comes to paid maternity leave:

Out of 173 countries studied, 169 countries offer guaranteed leave with income to women in connection with childbirth; 98 of these countries offer 14 or more weeks paid leave. Although in a number of countries many women work in the informal sector, where these government guarantees do not always apply, the fact remains that the U.S. guarantees no paid leave for mothers in any segment of the work force, leaving it in the company of only 3 other nations: Liberia, Papua New Guinea, and Swaziland.

The U.S. hasn’t required paid maternity leave even though such leave results in “a decrease of complications and recovery time for the mother and [a decrease in] the risk of allergies, obesity, and sudden infant death syndrome for the child.” So it seems that even a Fox News host can be sensible when personally faced with the implications of government policy.

This blog is part of the #HERvotes blog carnival and was originally posted at ThinkProgress.