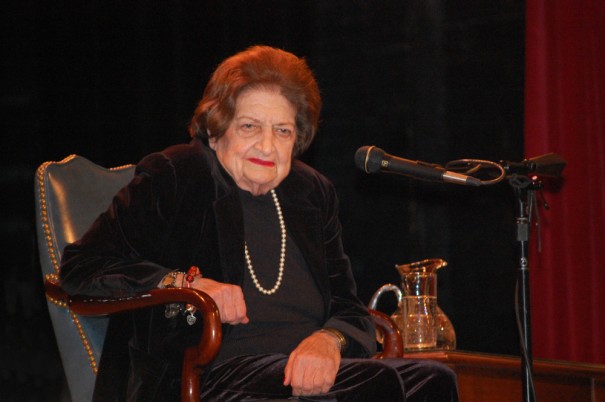 Helen Thomas, a trailblazing journalist who has been a fixture in White House reporting for over 40 years, died on Saturday at the age of 92.

A correspondent for United Press International for almost 60 years, Thomas was known for her brazenness and direct questions. Beginning with the Kennedy Administration, Thomas question 10 presidents about difficult subjects. In a statement, President Obama said “Helen was a true pioneer, opening doors and breaking down barriers for generations of women in journalism. She covered every White House since President Kennedy’s, and during that time she never failed to keep presidents – myself included – on their toes.” She was famous for her standard “Thank you, Mr. President” conclusion, which has even been incorporated into feature films about the White House.

“Helen Thomas was a strong feminist who deeply believed in women’s rights and fought for them,” said Eleanor Smeal, President of the Feminist Majority Foundation. “She was fierce in her quest to expose the truth. We will miss her.”

Thomas was the first woman to join the White House Correspondents’ Association and the Gridiron Club, a prestigious Washington reporters’ organization. She later became the president of the White House Correspondents’ Association and the first female president of Gridiron. She battled with the National Press Clubin the 1950s and 1960s alongside fellow female reporters Fran Lewine (Associated Press) and Elsie Carper (Washington Post) to gain admittance. They were only allowed to sit in the balcony at the National Press Club in 1956, and won full membership rights in 1971.

In a statement honoring Thomas, the Gridiron quoted her as once saying “There is something about the White House that seems to encourage secrecy. Our role is really to try to make presidents accountable. The media, is the only institution in our society that has the privilege of questioning a president on a regular basis and making him accountable.”