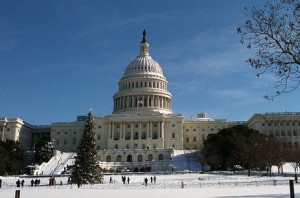 After the Thanksgiving feast, some lament how quickly the focus shifts to next round of holidays – but I have to admit I embrace it. Christmas music in the air 24/7? Fine by me. My tree is up, the house is bright with twinkly lights, and I’m thrilled to exchange my typical coffee order at Starbucks to a peppermint mocha in a bright red cup.

Sadly, I can usually count on some Members of Congress to put a damper on my holiday spirit. Just this Sunday, as I was trying to get a head start on trimming the tree, Sen. Pat Toomey (R-PA) was on “This Week,” saying he was “terribly disappointed” that the super-committee (of which he was a member) did not agree on a deficit reduction plan along the lines of his proposal – a proposal that would cut taxes for the highest-income earners while forcing lower-income families to bear both harsh program cuts and substantial tax increases. (Needless to say, we at NWLC were not disappointed that Sen. Toomey’s plan did not win over a majority on the super-committee.)

Then, when Christiane Amanpour asked Sen. Toomey whether he would support an extension of federal unemployment insurance (UI) for long-term unemployed workers (which is set to expire at the end of this year), he replied: “You know, we’ll take [the payroll tax cut and federal UI extensions] up, and I think probably some package of that with other features might very well pass.” Those “other features” are not likely to include even the tiniest of tax increases for millionaires, which Sen. Toomey and his colleagues have repeatedly rejected in connection with other jobs measures; indeed, the Senator went on to say, “the problem that’s creating this deficit is not a revenue problem…What’s happened … is this staggering explosion in spending… And that’s what’s got to change.” So in other words, given the 9 percent unemployment rate, Sen. Toomey might agree to continue UI benefits for the millions of workers counting on them – but only in exchange for steep spending cuts. (Other senators, like Rand Paul (R-KY), have made similar statements in recent weeks.)

I, for one, think “what’s got to change” is a mindset that prioritizes the protection of the very wealthy above all else, while demanding continued sacrifice from the poor and the unemployed. Any spending cuts demanded in return for a federal UI extension are likely to come from programs that low-income people depend on, including some of the very same people relying on UI. Even just this once – heck, because it’s the holidays – I’d love to see a majority in Congress agree to extend UI simply because it’s the right thing to do, without exacting a ransom.

Fortunately, some Members of Congress are trying to do just that. Tomorrow Rep. Sander Levin (D-MI) is hosting a press conference to highlight the stories of the workers who depend on UI benefits and call for passage of the Emergency Unemployment Compensation Extension Act. We’ll be reporting back soon to help you get to know the people behind the unemployment numbers.