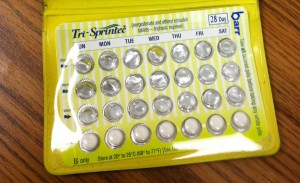 Despite enormous pressure from the National Conference of Catholic Bishops, the Obama Administration recently decided not to broaden the religious exemption for contraceptive coverage under the Preventive Care package of the Affordable Care Act. This demand for additional exemptions,  would have denied millions of American women contraceptive coverage, including students, teachers, nurses, social workers, and other staff (and their families) at religiously-connected or affiliated schools, universities, and hospitals, as well as agencies and institutions like Catholic Charities.

The Catholic Bishops are now leading a backlash against this decision, and women are speaking out.  Because of the Affordable Care Act, millions of women who may have been denied access to birth control will now have full access under their health insurance plan, with no co-pays or deductibles, beginning in August 2012. Birth control is the number one prescription drug for women ages 18 to 44 years. Right now, the average woman has to pay up to $50 per month for 30 years for birth control. As a result, many women have had to forgo regular use of birth control and half of US pregnancies are unplanned.

Women of all faiths are employed by hospitals and schools that are owned by religious interests, and they should not be denied equal health care coverage.  We urge the Obama Administration to continue to stand strong for women’s health care.

Join The Coalition of Labor Union Women in telling the Senate that you oppose S.2043.

The Long History of the War Against Contraception- Ellen Chesler, New Deal 2.0

I Don’t Use Birth Control, But I Want Access To It– Abigail Collazo, Fem 2.0

Would You Like an Unplanned Pregnancy with that Burrito?– Jen Wang, NARAL’s Blog for Choice

An Unholy Alliance Between the Bishops and the Right-Wing Attack Machine– Amy Allina, Raising Women’s Voices for the Health Care We Need, National Women’s Health Network

Religious Freedom in the Crosshairs of Catholic Bishops– Catholics for Choice

Birth Control and Government: The Right of Refusal Should Belong to Women -Nancy K. Kaufman, National Council of Jewish Women

For the Sisters -Megan Lieff, Religious Coalition for Reproductive Choice

Thank you, Obama, For Standing with ALL Women on Important Health Care Issues -Lacy Langbecker, the Wisconsin Alliance for Women’s Health

Would you let someone make your contraceptive decisions for you? Didn’t think so -Mara Gandal-Powers, National Women’s Law Center

My Health Is Not a Pork Chop -Dania Palanker, National Women’s Law Center