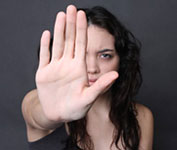 s joining our voices together in a blog carnival urging passage of the “real” Violence Against Women Act (VAWA) reauthorization — the bi-partisan bill that has already passed the Senate.

The House has passed a version of VAWA reauthorization that some have called “VAWA Lite” or “fake VAWA” – because it removes the Senate bill’s provisions addressing safety on campuses and protections for LGBT, immigrant and Native American survivors of violence.

Since the passage of VAWA in 1994, the rate of intimate partner violence has declined by 67%. VAWA provides services to victims of violence and has improved the criminal justice response to violence against women.  But the last reauthorization of VAWA expired December 31, 2011.

Eliminating violence against women is not… must not… be a partisan issue.

HERvotes urges the House to pass the bi-partisan Senate VAWA and extend VAWA’s lifesaving programs and services for another five years.

#HERvotes, a multi-organization campaign launched in August 2011, advocates women using our voices and votes to stop the attacks on the women’s movement’s major advances, many of which are at risk in the next election.

Violence Against Women at College? Something to Worry About – Allyson Bach, NWPC

Violence is Violence, No Matter What Gender – Samantha Aster, NWPC