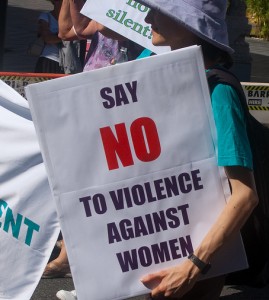 For the eighth #HERvotes blog carnival, our coalition of women’s groups is joining forces for the reauthorization of the Violence Against Women Act.

The Centers for Disease Control and Prevention’s 2010 National Intimate Partner and Sexual Violence Survey found alarming rates of sexual violence, stalking, and domestic violence. One in 4 U.S. women has been the victim of severe physical violence by an intimate partner, and nearly 1 in 5 has been raped in her lifetime.

This week, the Senate Judiciary Committee will consider legislation that would reauthorize the Violence Against Women Act (VAWA), the largest policy effort aimed at responding to and preventing these crimes. First passed in 1994, VAWA supports comprehensive, cost-saving responses to domestic violence, dating violence, sexual assault and stalking. Since its passage in 1994, more victims report domestic violence to the police and the rate of non-fatal intimate partner violence against women has decreased by 53 percent.

Let’s spread the word and make sure Congress hears our voices.

Violence Is a Cycle: We Must Reauthorize VAWA -John Roach, Break the Cycle

Hey Congress, How About Giving Half the Population Some Love? -Janet Hill, Coalition of Labor Union Women

“It’s a Good Time To Be a Black Woman? Well, Not So Good When It Comes To Violence”– Angela Sutton, Black Women’s Health Imperative