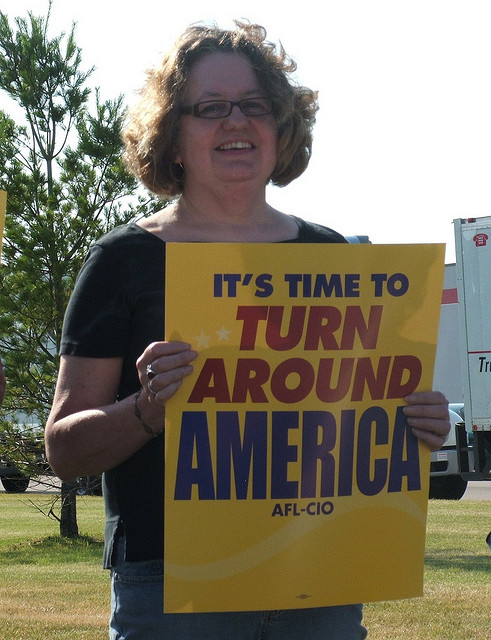 She sits staring at the wall in front of her, and all she feels is emptiness. Its white glow is ominous and blank, like her future. She has lost her job. She asks herself how she will pay the rent, how she’ll put dinner on the table, how she’ll pay for child care, how she’ll even find the strength to get out of bed in the morning. She wants to know, after years of taking care of others as her job, who will take care of her.

While the recession was particularly tough on men, the economic “recovery” has been extremely unkind to women. Since the recession officially ended in June 2009, women have lost 345,000 jobs and counting. The job gap between women and men is now 1.5 million, with women’s unemployment rate growing while men’s declines. Simply put, the jobs that have been created since the recession are for men, and the jobs disproportionately held by women are in jeopardy. Already, women lost nearly three-quarters of the public sector jobs that have been cut.

She is your mother, your sister, your aunt, your friend. She works tirelessly to ensure we are taken care of as children and in old age. She is there when we are sick. She dedicates her life to educating our young. She is there to help a woman affected by domestic violence get back on her feet. She is the light in the darkness. She is one of the women disproportionately represented in service, health care, child care, education, social work, or in non-profits. We couldn’t exist without her, yet her job hangs in the balance.

On average, a woman is paid only 77 cents to a man’s dollar; if she is African-American she is paid just 68 cents; and if she is Latina she is paid 59 cents. This wage gap results in the loss of an average of $380,000 over a woman’s career, so how can she possibly be prepared for an economic crisis? Where is her security? Where is her financial freedom? Without equal pay for equal work, she is left without a safety net when her job unceremoniously disappears.

What this country needs is an aggressive jobs plan for women. We need creation of jobs in the sectors that are disproportionately filled by women, and we need these jobs to be seen for what they are — the cornerstone of our society. Without educators, healers and caregivers, our society would fall apart. They are the glue that holds it together. We need these women to be paid livable wages so they can provide for themselves and their families.

Don’t let her fade into the darkness. Let her keep her job, and know she is safe. Let her be needed and rewarded. Let her reach her potential. Vote in the next election. Vote so you can help advance legislation like Jan Schakowsky’s Emergency Jobs to Restore the American Dream Act. Stand up for your mother, your sister, your aunt, your friend. Yourself.