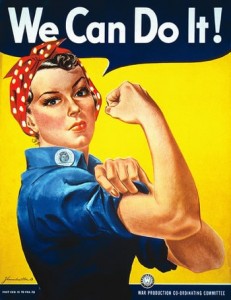 Our first #HERvotes blog carnival was so successful, we’re doing it again! On August 25-26, to mark the anniversaries of the passage of the 19th amendment and the March on Washington, Ms. joined with 21 women’s organizations to collectively publish 77 blog posts with a single harmonious message: We must mobilize women voters in 2012 around preserving women’s health and economic rights.

Since then, #HERvotes has had a growth spurt: Our numbers have risen to 31 organizations and counting. We welcome YWCA USA, the General Federation of Women’s Clubs, the National Asian Pacific American Women’s Forum, the National Conference of Puerto Rican Women, the Coalition of Labor Union Women, the Business and Professional Women’s Foundation, NARAL ProChoice America, the National Association of Social Workers, SisterSong and Advocates for Youth!

Now, #HERvotes is launching a second blog carnival around the topic that’s on every mind: jobs and the economy. Dr. Avis Jones De-Weever, Executive Director of the National Council of Negro Women says,

As poverty increases, and high unemployment persists, there is perhaps no more critical time for women to ban together on behalf of demanding the enactment of a jobs growth strategy desperately needed by women and families throughout the nation.

Recently released data from the U.S. Census Bureau revealed serious declines in women’s economic status, including the highest poverty rates in 17 years for women. This shocking and troubling trend makes it abundantly clear that it’s time to come together to fight attacks on women’s economic and health security, and to help rebuilt our nation’s economy. Our nation didn’t become strong by putting women and families last.

Eleanor Smeal, President of the Feminist Majority Foundation and Publisher of Ms., concludes,

Let’s band together to alert women them to the high stakes of the 2012 election! Our first carnival reached millions–help us do it again by sharing the posts below and Tweeting with the hash tag #HERVotes.