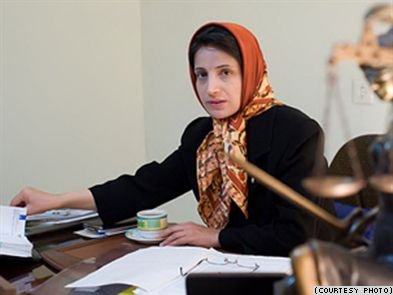 Nasrin Sotoudeh, an Iranian Human Rights lawyer, received an 11 year prison sentence. Sotoudeh was arrested in September and went to trial on November 15 for allegedly acting against state security, assembling, and collusion with intent to disrupt national security. She was also charged for working with the Center for Human Rights Defenders, which was founded by Nobel Laureate Shirin Ebadi. In addition to the 11 year prison sentence, the court has prohibited Sotoudeh from practicing law or leaving Iran for the next 20 years.

Before her arrest, Sotoudeh was a member of the One Million Signatures Campaign and on the board of directors of the Society for Defense of Children’s Rights.

Hadi Fhaemi, a spokesperson for the International Campaign for Human Rights in Iran, stated, “This is a transparently political sentence aimed at taking one of Iran’s leading human rights defenders out of practice via a gross miscarriage of justice. Nasrin Sotoudeh has broken no laws, but is being jailed because she has upheld Iranian and international law in a judicial system bent on violating human rights.”

Sotoudeh, who has been in Evin Prison since September 4, went on a hunger strike to protest the conditions of her illegal arrest. After ending her hunger strike for a few days, she started a dry hunger strike, protesting her deprivation of her legal rights, such as the right to telephone calls and visits from her family members and her two young children along with the gross mishandling of her case. She broke her dry hunger strike on November 11 and ended her hunger strike, which lasted a total of 50 days, following the trial.