President Barack Obama and Vice President Joe Biden today announced the launch of It’s On Us, a multi-platform media campaign and national action plan targeted at ending campus sexual assault. “We’re here to say today that it’s not on you,” Obama said, referencing the survivors who spoke out at the launch and have taken action across the nation to end sexual violence. “This is a problem that matters to all of us.” 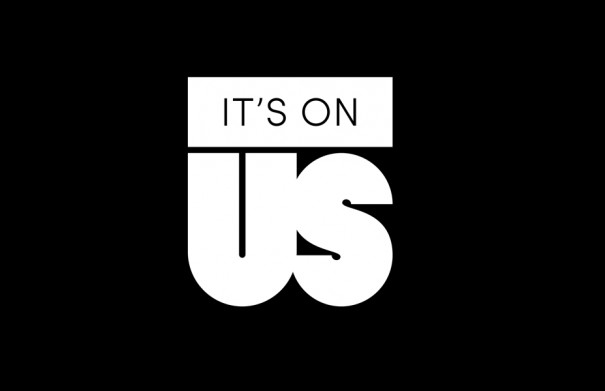 The It’s On Us campaign, which is targeted at young people and especially young men, seeks to shift societal norms around sexual violence, inspiring everyone to see prevention as their responsibility and holding all individuals accountable for creating environments where sexual assault is unacceptable and survivors are supported. It’s On Us also seeks to support student activism and build on existing efforts by campus sexual assault survivors across the country to hold colleges and universities accountable for failing to support survivors or take rape seriously.

The campaign also marks another effort by the Obama administration to tackle the nationwide epidemic of sexual assault on college campuses.

“Our society still does not sufficiently value women,” Obama remarked. “Unless women are allowed to fulfill their full potential, America will not fulfill its full potential… [Laws] won’t be enough unless we change the culture that allows assault to happen in the first place.” 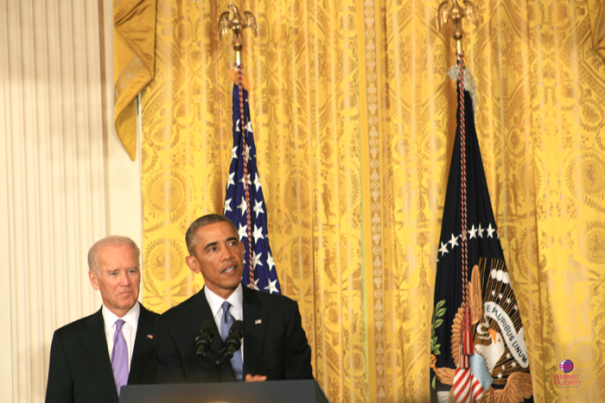 Under President Obama and Vice President Biden’s leadership, the White House has taken unprecedented steps to address sexual violence in the past year alone. In January, President Obama announced that he was convening the first-ever White House Task Force to Prevent Campus Sexual Assault. Their first report, entitled “Not Alone,” was released in April alongside a partner website, NotAlone.gov, where survivors could locate resources and learn how to take action against universities that failed to protect them. The “Not Alone” report, gathered after a 90-day review period, details steps the Task Force will take to prevent sexual assault and support survivors on college campuses, including commitments to gather data on the prevalence of sexual violence on every American college campuses, the exploration of legislative options to improve those data streams, and piloting and evaluating prevention programs on campuses.

A focus of It’s On Us is bystander intervention, which was spotlighted in the “Not Alone” report as a successful tool for shifting cultural norms around sexual violence and engaging individuals in creating safe spaces. Bystander intervention efforts, most often targeted at men, empower folks to speak up when they see violence or abuse and intervene in high-risk situations where sexual assault might occur.

“Violence against women is not a women’s issue alone, it’s a men’s issue,” Biden said. “To all the guys out there: Step up. Be responsible. Intervene.”

Individuals can show their support for It’s On Us in a variety of ways using different online platforms. At the campaign website, ItsOnUs.org, anyone can commit to changing their community’s culture around sexual assault by taking an online pledge. Social media users can also create custom “badges” to display instead of their profile pictures across various networks. For activists interested in doing more, the campaign also published a free, downloadable toolkit for implementing the campaign on their campuses or in their communities. The White House will also be placing It’s On Us advertisements with print, broadcast, and campus media outlets across the country and holding community discussions, pledge drives, town halls, and other events across the country in the coming months, including a Week of Action in November.

According to the White House report Rape and Sexual Assault: A Renewed Call to Action, 1 in 5 women are sexually assaulted in college. Despite the overwhelming prevalence of sexual violence on campuses, the report found that only 12 percent of campus sexual assault survivors report their assault to authorities or administrators. Over 50 schools are currently under investigation for mishandling sexual assault cases, and a rising tide of student activism has compelled legislators and community members to mobilize in recent years around awareness and prevention efforts.

“I remember how I felt, because unfortunately I knew all the statistics when I dropped my beautiful daughter off at college, Biden said. “Every one of these statistics is a life. ”

It’s On Us is a joint effort of the White House, Mekanism, Pvblic Foundation, and Generation Progress. Various universities, non-profit organizations, sports team, and nationally-recognized corporate entities will also join the campaign as partners, including the Feminist Majority Foundation and the American Association of University Women.