The nation is remembering the nine victims of the Emanuel AME Church mass shooting this week, as President Obama gave an unforgettable eulogy for State Senate Reverend Clementa Pinckney. 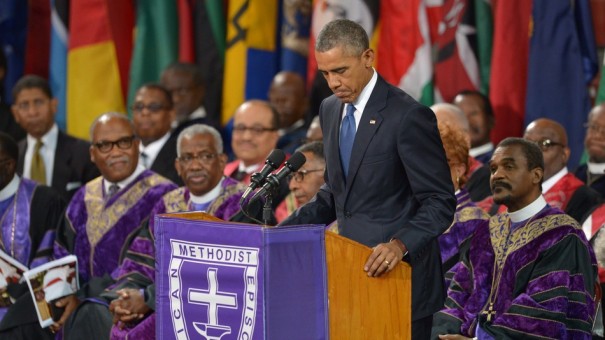 President Obama knew Reverend Pinckney personally, meeting him during his 2008 election campaign. He recounted Pickney’s impressive life, as he became a pastor at age 13, a minister at 18, and was the youngest African American to be elected to a position in the South Carolina House at just 23. The President spoke of Reverend Pickney’s kind spirit, calling him a good man and saying he was “full of empathy and fellow feeling.”

In his eulogy, President Obama also mentioned the Reverend’s uphill battle as a minority in the state senate. “His calls for greater equity were too often unheeded. The votes he cast were sometimes lonely. But he never gave up- he stayed true to his convictions.” Reverend Pinckney, however, was always protecting those in need, as the President said, “he encouraged progress as a reverend and as a state senator.”

President Obama honored Pinckney’s memory too by urging action on gun violence, police violence, and the removal of the confederate flag, saying that it represents “more than ancestral pride.”

“Maybe then we can realize the way racial bias affects us in ways we might not realize,” he said. “History must not be a sword to justify injustice… but must be a manual for how to avoid repeating the mistakes of the past.”