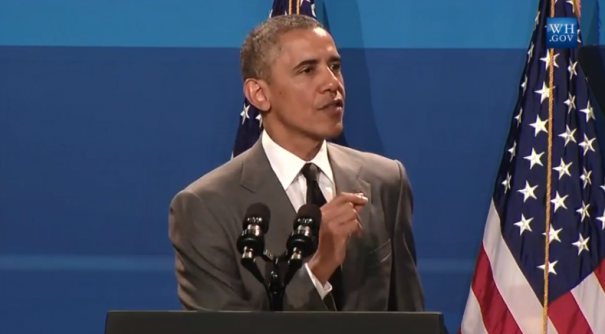 Declaring that “when women succeed, America succeeds,” the President highlighted several items on the Women’s Economic Agenda – an agenda promoted by major women’s leadership organizations such as the National Women’s Law Center, the National Partnership for Women and Families, the National Organization for Women, and the Feminist Majority, and championed by the House Democratic Leader Nancy Pelosi (CA) and Rep. Rosa DeLauro (CT), the ranking member of the US House Appropriations Subcommittee on Labor, Health and Human Services, Education, and Related Agencies.

“We’ve been working to gain these programs for 40 years. It’s long overdue,” continued Smeal. “Women are half of our nation’s paid workforce, and we can’t pretend any longer that these programs are a luxury. Every day without action means that millions of women, their families, and their loved ones suffer needlessly.”

President Obama specifically called on Congress to pass legislation providing paid family leave. “There is only one developed country in the world that does not offer paid maternity leave, and that is us,” said the President. “And that is not the list you want to be on by your lonesome. It’s time to change that, because all Americans should be able to afford to care for their families.”

The Family and Medical Leave Insurance Leave Act (FAMILY Act), introduced by Congresswoman DeLauro and Senator Kirsten Gillibrand (D-NY), would permit employees to earn up to 12 weeks of paid family leave each year through the creation of a national insurance fund.

The President also focused on raising the federal minimum wage, the importance of fair labor practices for pregnant women “because too many are forced to choose between their health and their job,” and on accessible child care. “Many women can’t even get a paid day off to give birth,” he said, “now that’s a pretty low bar.” President Obama also announced at the Summit that he would sign a Presidential Memorandum directing federal agencies to expand flexible workplace policies.