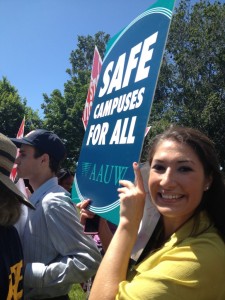 There is a crisis at colleges and universities across the nation­. In just the first six weeks of 2013, a Huffington Post survey found 75 instances of sexual assaults reported on college campuses. This is outrageous, but we shouldn’t be surprised. A U.S. Department of Justice study found that around 28 percent of womenare targets of attempted or completed sexual assault while they are college students.

Why is it, then, that on a recent Fox News roundtable, The Five, co-host Bob Beckel asked, “When was the last time you heard about a rape on campus?” Although Beckel’s question suggests his ignorance about the rampancy of sexual assault on campus, his comment is especially misguided given that the number of reported incidents is only a fraction of the actual number that occurs. The Department of Justice study finds the reported number to be between 2 and 13 percentof all assaults, depending on the circumstances.

Beyond the shame, stigma, and fear associated with reporting a sexual assault, victims’ hesitancy to come forward often stems from unawareness about the resources and protection available to them on college campuses. Under the Clery Act of 1990, American colleges and universities are required to disclose information about crime on their campuses, including incidents of sexual assault. Yet even under the law’s requirements, ongoing incidents — like the University of North Carolina, Chapel Hill’s alleged underreporting of sexual assault to the federal government — highlight that we must do more.

Currently, schools are not required to provide prevention training to all students, nor do they have to have a public and comprehensive policy explain the resources available to students and the procedures students should follow when such an incident occurs. That’s why AAUW has been working to pass the Campus Sexual Violence Elimination (SaVE) Act, which was included in the Violence Against Women Reauthorization Act recently passed by the Senate.

The Campus SaVE Act, championed by Sen. Bob Casey (D-PA) and Rep. Carolyn Maloney (D-NY), would require all colleges and universities to create prevention programs for students. Schools would also need to report more than just the number of sexual assaults on campus — including greater transparency about dating violence, domestic violence, and stalking. Under the act, victims would also be provided with information on counseling, health services, school disciplinary proceedings, and legal options. By spreading awareness and expanding resources available to students, the act aims to reduce sexual assault, dating violence, domestic violence, and stalking on campus, while also encouraging victims to seek help and report the crimes.

Standing in the way of the Campus SaVE Act’s goals is the House of Representatives, where Republican leadership recently released its own version of VAWA. Notably absent from the House bill is Campus SaVE. For this and other reasons, AAUW simply cannot support the House bill.

Each day that VAWA is not reauthorized with campus safety measures means another day that victims go without the resources they need. We can’t wait another day, much less another year. We must pass the Violence Against Women Act now with the Campus SaVE Act included. Use AAUW’s Action Network to tell your representative you agree.

This post was written by National Student Advisory Council member and AAUW Public Policy Intern Bethany Imondi and originally posted on the AAUW Blog. Imondi’s participation in the SAC is sponsored by Dagmar E. McGill in memory of Happy Fernandez and Helen F. Faust.