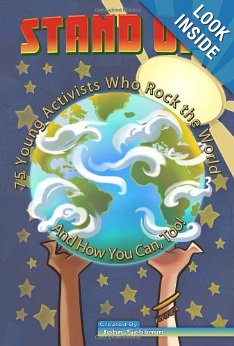 Girls Learn International has had a great year – the FMF program focused on expanding education for girls and all young people around the world celebrated its tenth anniversary this year, and recently three of their leaders and activists were featured in STAND UP!, a book centered on “75 young activists who rock the world” which came out last week:

Every story in STAND UP!: 75 Young Activists Who Rock the World, And How You Can, Too! is a launching pad for lessons and discussions on many topics—bullying, the arts, equality, disabilities, empowerment, family, environment, peer pressure, community service, education, friendship, leadership, race relations, faith, diseases and other medical issues, poverty, cultural understanding, healthy eating and living, animal welfare, drugs, military issues, social entrepreneurship, and so much more.

The free-to-download STAND UP! DISCUSSION GUIDE is also available, and can be a starting point for exploring these issues in your community and using the book as a launching pad to something much bigger and brighter: a better tomorrow.

The three spotlighted GLI activists shared their stories from the book on the GLI blog last week; here’s a preview into each piece focused around how the program inspired their futures in activism – and how bright those futures are.

In “Because She Is A Girl,” Sarah Musa, co-founder of her local GLI chapter, spoke about the lessons she’d learned about activism and the knowledge she gained about education around the world through her involvement. Now moving on to college, she’s made it clear that we ain’t seen nothin’ yet:

Through our Girls Learn International chapter, I learned that I should never take anything for granted, especially the right to get an education. I believe that with freedom of education, girls can become the brightest and most successful leaders.

Now, as a freshman at James Madison University, I hope to build upon my high school efforts and to continue to be an inspiration and advocate for girls around the world. My mission is stronger than ever: No one should ever be denied an education or equal rights simply because she is a girl.

Sophia and Nadia Tareen, co-founders of their school’s GLI chapter, shared the story of their journey to Pakistan in “The World Lies in the Hands of A Girl.” The two were impacted by the visit and the girls they spoke to, and the experience compelled them to take action.

Through their commanding voices, we heard their determination to become educated. And through their resolution to break the barriers before them, we saw the value of the investment. Keeping girls in school is a real solution to the epidemic of poverty that affects the political, economic and social systems of Pakistan.

Girls like Saira are the ones who spark change by participating in household and community decisions, standing up for women’s basic rights, and protecting other girls from falling into the traps of outdated and discriminatory customs. Girls like Benazeer will end the vicious intergenerational cycles of inequality and poverty. And brave girls like legendary Pakistani activist Malala Yousafzai, who at age 15 was shot by the Taliban and nearly died for her beliefs that every girl deserves an education, are the role models for courageous protestors of injustice. These inspiring young women are the ones who will instill real and purposeful change in communities that would otherwise stagnate in archaic conventions.

Girls are the solution that can move the world forward. We are two sisters asking all of you who are fortunate to live in countries where education is widely accessible to stand up and take action! Global progress starts with giving a girl a chance, a chance made possible if she is put into a school. Join us and we can change the world. 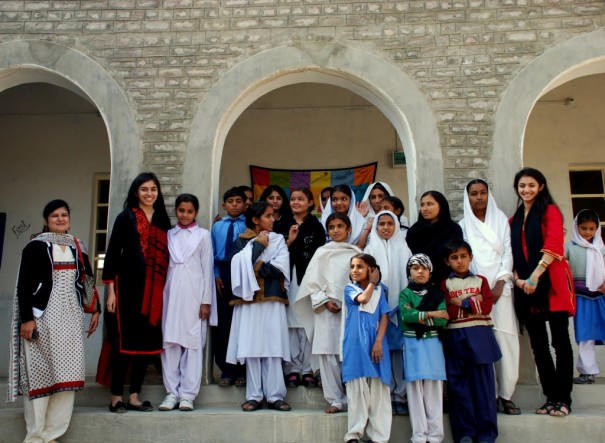 Isabella Gelfand shared her own story of speaking at last year’s Women, Money, Power Summit in the book, honoring both the two-day action-packed Feminist Majority event and her own contributions to global education as an active GLI member in her school’s chapter.

I was 14. As I stood, knees shaking, at the Feminist Majority Foundation’s “Women, Money, Power” Forum being streamed on C-SPAN from Washington D.C., I couldn’t keep from asking myself, How did I get here?

I remembered when my mother handed me the list of clubs offered at my new middle school. I was almost 12 years old and would be entering the sixth grade. I skimmed the list until something caught my attention: Girls Learn International (GLI), an organization that works to end poverty through girls’ education…

By exchanging projects with girls at our partner school—Abdullah Bin Omar School, located in an area where the Taliban had denied girls access to an education in Afghanistan—I learned how much these girls value their education. For example, in one letter our school received, an Afghanistan student wrote, “My goal is to be a useful individual for my people. It takes a long time to come to school, but it is a road I love to take.”

You can purchase the book on Amazon.