The Texas Policy Evaluation Project (TxPEP) today released a groundbreaking report on self-induced abortion. The report found that at least 100,000 Texas women have ever attempted to end a pregnancy on their own without medical assistance. These findings demonstrate that in the face of burdensome restrictions on abortions, like Texas’ onerous House Bill 2 (HB2), women will resort to self-induction to terminate their pregnancies. 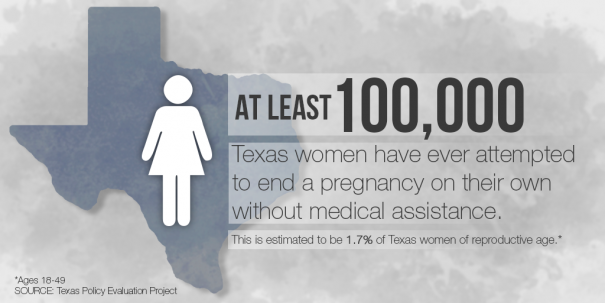 The Texas law has shuttered 22 clinics, leaving only 19 clinics across the entire state, cutting women’s access to safe, legal abortion. “Women still need abortions in our communities, and many of those women take matters into their own hands. Poor Texas women are finding themselves experimenting on their bodies when abortion is supposed to be legal,” said President and CEO of Whole Woman’s Health Amy Hagstrom Miller, who is the lead plaintiff in the legal challenge against HB2. The study confirms that when women don’t have access to abortion options and accurate health information, they will use whatever options and information are available, even if those turn out to be inaccurate or dangerous.

“Every woman should be able to get safe reproductive care in her community, including prenatal care, birth control, and abortion,” continued Hagstrom Miller.

The study—performed over five weeks from December 2014 to January 2015—is the first time statistics on self-induced abortion in the general population have ever been calculated by researchers. TxPEP estimates that somewhere between 100,000 and 240,000 women age 18-49 in Texas have ever tried to end a pregnancy on their own without medical assistance. The study outlines four primary reasons why women attempted to self-induce their abortion: financial limitations to travel to a clinic or pay for the procedure, the closure of their local clinic, the suggestion from a close friend or family member to self-induce, or to avoid the stigma or shame of going to an abortion clinic, especially if they had prior abortions.

On Friday, the Supreme Court agreed to review a challenge to HB2, which threatens to close more than 75% of abortion clinics in the state and deny millions of women access to safe, legal abortion. The case, Whole Woman’s Health v. Cole, seeks to permanently block two provisions of HB2. The first provision, which has already forced more than half of the clinics in the state to close, requires providers to secure hospital admitting privileges. The second provision forces clinics to fulfill costly, medically unnecessary ambulatory surgical center (ASC) requirements. The TxPEP study suggests that self-induction may become more common should the Supreme Court uphold these provisions as constitutional.