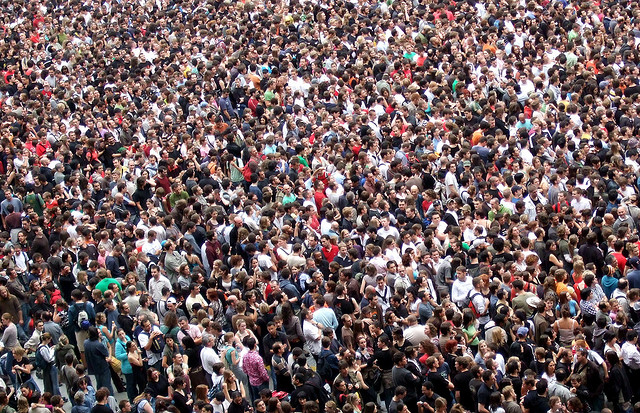 We humans mark a milestone today—the world’s population reaches 7 billion.  When I was born there were about 2.2 billion people on earth.  When my assistant was born there were a little more than 5 billion people on earth.  It took just 12 years to go from 6 billion to 7.  As the population climbs rapidly, unfortunately so does human suffering—mostly among women and children.  We can and must slow this precipitous climb.

More than 1 billion people are forced to live on less than a dollar a day.  Widespread hunger, malnutrition, and inadequate supply of clean water and sanitation exists.  About 1 billion people do not have enough to eat.  Nearly 11 million children will die before their 5th birthday, 60% of them from malnutrition. According to the United Nation’s World Food Program, “Hunger is the #1 world’s risk—it kills more people every year than AIDS, malaria, and tuberculosis combined.”[1]

More than 2.6 billion do not have basic sanitation. Another billion people have unsafe sources of drinking water.  Some 40% of the world’s people do not have access to a basic latrine.

Every minute of every day, somewhere in the developing world, a woman dies due to complications from pregnancy or childbirth…over 500,000 a year.   In some developing countries, pregnancy is the most common cause of death for women of childbearing age.

And more than 70,000 women and girls die every year due to complications from illegal and unsafe abortions.  Millions more are injured.

Nearly all these deaths and injuries are preventable.

It’s time we said enough.  The Feminist Majority Foundation is determined to change the direction of U.S. policies on international family planning.  Changes in U.S. policy can directly empower women and girls, save the lives and suffering of thousands of women and girls, and slow population growth, reduce human suffering, and help to create a more sustainable environment.

The Obama Administration proposed for Fiscal Year 2012 $769.1 million for international reproductive health and family planning assistance, including $47.5 million for the United Nations Population Fund (UNFPA), which works in 150 countries to prevent maternal mortality and expand access to contraception. The House Republican majority voted in 2012 to cut international RH/ FP to $440 million and to totally defund UNFPA — a staggering $329 million from the Obama Proposal and $208 million cut from 2010.

What do these gigantic House cuts mean? For every $10 million cut from the international family planning and reproductive health program:

On the domestic front, the House Republican majority voted in 2012 to eliminate all domestic family planning aid and to completely defund Planned Parenthood Federation of America (PPFA).  Not only does this cut access to birth control to poor American women, these policies also contribute to an unsustainable environment.  “Twenty percent of the world’s population in the industrialized nations use some “80% of global resources and consumes 30% more than the planet can regenerate.”[3]

Let your Member of Congress and Senators know today in honor of the 7th billionth person know we want a livable future for our children and grandchildren.  Stop playing politics with our world’s and nation’s future.  Vote to make international and domestic family planning and reproductive health more accessible for women who want and desperately need it. Let them know today and often.

For all of our lives,