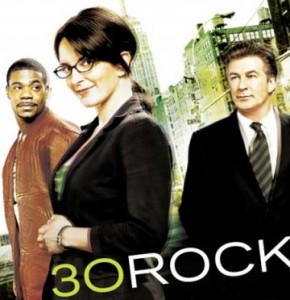 Sure, the famously wooden Al Gore had some good lines last night on 30 Rock (“You know, there’s an old African proverb that I made up”), but our favorite guest star was truly inanimate: a “This is What a Feminist Looks Like” T-shirt by Tina Fey’s eponymous character’s upstairs neighbor Brian. The shirt is used as one more piece of evidence that Brian—a gay cop whom Tina is trying to trick out of his tricked-out condo—is a compassionate, do-good-ing, all-around mensch.

Feminism as a positive character trait? On primetime TV? We’d be floored if it weren’t coming from 30 Rock creator and star Tina Fey. Not only has Fey’s meteoric career put to rest the notion that “women aren’t funny,” she’s also a self-identified feminist, and 30 Rock reflects it. One memorable episode featured Carrie Fisher as a washed-up feminist comedian beaten down by the industry—a role that garnered Fisher an Emmy nomination. Alex Baldwin’s alpha-male Jack served as the perfect sexist foil to Fisher, bellowing, “Don’t ever make me talk to a woman that old again!” Hopefully that arrow hit the target of at least a few industry execs’ consciences.

So we were delighted but not surprised to see a “This is What a Feminist Looks Like” T-shirt on 30 Rock. But of course, 30 Rock’s shirt was blatantly off-brand. You can get the real thing here.