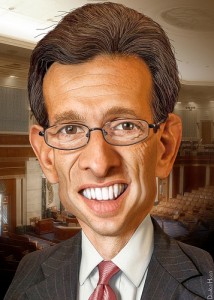 House Majority Leader Eric Cantor is a powerful player on Capitol Hill who has pretty much flown under the radar with the general public. But I predict that won’t be true much longer. Now that Cantor is taking the lead on blocking reauthorization of an inclusive version of the Violence Against Women Act in the House, more and more women are asking just who is this representative from Virginia’s 7th district, with his regressive brand of politics?

These anti-woman measures are bad enough. But the worst has been Cantor’s implacable hatred of the Violence Against Women Act, an antipathy so fierce that he not only took the lead in blocking it during the 112th Congress, but has now stepped forward to derail it once again. His reasoning? Near as I can tell, he just doesn’t want some victims to get help.

On Feb. 12, the Senate passed an inclusive version of VAWA reauthorization, S. 47, by an overwhelming bipartisan vote of 78-22. The Senate’s bill would offer new protections to lesbian, gay, bisexual and transgender victims, who report being unable to access services at astonishingly high rates. It would address college and university-based sexual violence, dating violence and stalking by requiring campuses to be transparent about their assault rates, prevention programs and assistance for victims. It would also recognize Native American tribal authorities’ jurisdiction over rapes committed by non-tribal members on reservations.

I was heartened by the huge margin of victory in the Senate. It indicates that Senate Republicans understand they need to regain credibility with women voters — specifically on the issue of rape — and supporting a reauthorization of VAWA that protects all sexual assault victims would be a step in the right direction. Some House Republicans understand this too; 19 of them sent a letter to the House Republican leadership urging them to pass a bipartisan bill that “reaches all victims.” In fact, we know we have the votes in the House to pass the Senate’s inclusive VAWA, if the leadership will just allow it to happen without playing political games.

Unfortunately, Eric Cantor is either too tone-deaf or too arrogant to do the right thing. Rather than moving swiftly to pass the Senate VAWA bill, Cantor has produced a “substitute amendment” that eliminates protections contained in the Senate bill, and even scales back current law, while also undermining the Office on Violence Against Women. Among its many flaws, this substitute drops LGBT protections; permits non-Native suspects to circumvent tribal authorities, leaving Native American women with inadequate protection from their abusers; and allows college and university administrations to shirk their duty to keep students safe from sexual assault.

To boot, in keeping with the Republicans’ 2013 stealth strategy as telegraphed by Louisiana Gov. Bobby Jindal (i.e., stick with the extremist anti-woman agenda but don’t be so obvious about it), Cantor has put his own stealth moves on VAWA: His bill is deceptively numbered S. 47 (because it’s a substitute amendment of the Senate bill), and it was put forward by a woman, House Republican Conference Co-Chair Cathy McMorris Rodgers (R-Wash.). I’d say that’s too clever by half. Women voters are not so easily fooled, and will likely be offended by the clumsy attempt at subterfuge.

Eric Cantor is like this season’s Paul Ryan: an influential conservative with bad ideas who has thus far escaped public scrutiny. This time around we don’t have a Mitt Romney to help raise Cantor’s profile, but that’s okay. The majority leader’s attempt to derail a hugely popular bipartisan VAWA — and his willingness to write off the more than 1,400 local, state and national organizations that have expressed support for the Senate bill — will ensure that he will have to answer to the voters for his actions, probably sooner rather than later. Let me be the first to say it couldn’t happen to a nicer guy.