Time Magazine is facing backlash after a poll they released last week listing the work “feminist” alongside popular slang terms on a list of words that should be “banned” in 2015. 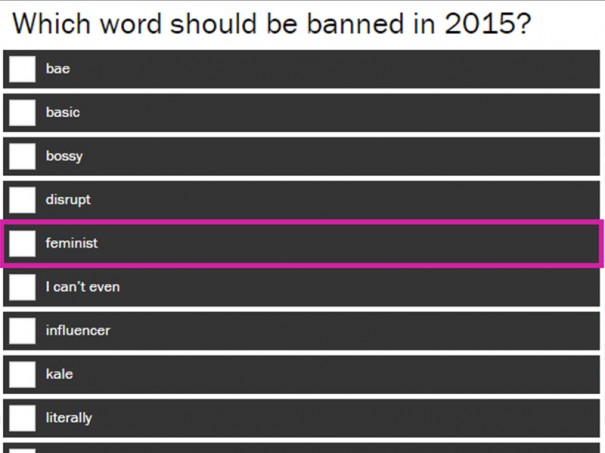 TIME posted a poll to its readers asking them to vote on a list of words that may cause you to “seek out the nearest pair of chopsticks and thrust them through your own eardrums.” Among common slang terms like “bae,” “turnt,” and “on nom nom nom,” TIME also posted the word “feminist,” for which the Magazine is now receiving a lot of negative attention.

The magazine lists reasons as to why each word on the poll makes them “cringe,” and the reason for listing “feminist” is attributed to the word becoming “a thing that every celebrity had to state their position on whether this word applies to them, like some politician declaring a party.” Despite the fact that TIME’s current cover artist is Taylor Swift, and Swift discusses her recent claiming of the title “feminist” within the feature article, TIME seems to think it might be appropriate and necessary to ban the word.

In a response to TIMEe’s poll, Huffington Post writer Emma Gray reminds us of the power behind the title “feminist.” Feminists have, after all, achieved women’s suffrage, fought for equal pay, demanded affordable and comprehensive healthcare, organized on college campuses to tackle the issue of sexual assault, and have fought tirelessly to achieve women’s equality. Gray writes that banning the word is not only offensive to the majority of women who identify as feminist, but “doing so, in essence, would erase the existence of a decades-long social movement.”

The poll has caused an uproar on social media, and the Feminist Majority Foundation released a petition to Managing Editor Nancy Gibbs, writing “Your poll adds to the hateful push against those who fight for equality every day” and asking Gibbs to “please reconsider and remove the word from your poll.” Currently, the petition has been signed by over 6,000 people.

Take Action: Bothered by the TIME article? Sign the petition here, and let them know!