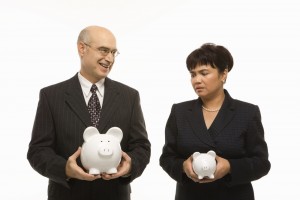 President Barack Obama has declared today Equal Pay Day to highlight the discrimination women currently face in wages for equal work. In an official statement, President Obama said “On National Equal Pay Day, we recognize this injustice by marking how far into the new year women have to work just to make what men did in the previous one. Wage inequality undermines the promise of fairness and opportunity upon which our country was founded. For families trying to make ends meet, that gap can also mean the difference between falling behind and getting ahead. … And just as diminished wages shortchange families, they slow our entire economy – weakening growth here at home and eroding American competitiveness abroad.”

Women currently only make 77 percent of what their male counterparts make, and face discrimination in benefits, wage increases, hiring and advancement, and time off. “We make 77 cents on the dollar, but if you check for age, women at 50 versus a man at 50, the gap widens,” Eleanor Smeal, president of Feminist Majority Foundation said. “If you count benefits, the gap widens because most women do not have pensions, and 48% of women workers have no paid sick days, let alone paid family medical leave.”

Another barrier to equal pay for women is paycheck secrecy. According to Representative Rosa DeLauro and Senator Barbara Mikulski in in op-ed in the Huffington Post, “Workers who violate formal pay secrecy policies or ignore their managers’ informal admonitions face potential retaliation, including the prospect of being fired, demoted, or passed over for raises and promotions. In short, pay secrecy policies keep unequal pay hidden from employees and enable pay discrimination to continue.” Representative DeLauro and Senator Mikulski have introduced the Paycheck Fairness Act in an attempt to stop this discrimination. “The Paycheck Fairness Act, which we have introduced in Congress to give real teeth to the Equal Pay Act, addresses the lack of accountability that allows companies to get away with underpaying women … Among other things, it would ban retaliation against workers who discuss their wages and close the door on pay secrecy for good,” they wrote.